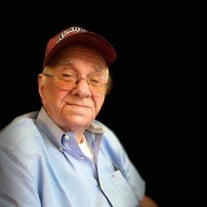 James Montgomery, 84, of Dawson, Texas passed away on January 15th surrounded by his closest family members. He was born June 11, 1937, in Dawson, Texas to Herman and Tressie Hargrove Montgomery. James is survived by his wife, Pamela Montgomery; his brother Leon and sister Patsy; his children: Tina, Terry, Melinda and Scheri; grandchildren, Melissa, Danielle, Aaron, Tiffany, Chelsea, Hana and Ava as well as his great grandchildren. James was preceded in death by his parents, Herman and Tressie Montgomery, son James Jr. and daughter Janet. James was born on June 11th in Dawson, Texas. He grew up in Navarro Mills, TX close to his extended family. After high school he joined the Air Force in 1957 where he learned how to be an electrician and received the Good Conduct medal. While in the Air Force, he also worked as a mobile home delivery driver to support his family. Later on, he worked as a Morton delivery truck driver. In the 1960’s he became an entrepreneur by partnering with Billy Ray Cobb, Sr. in establishing C&M Air Conditioning. In the 1970’s he became an international refrigeration consultant in the commercial refrigeration industry where he would enjoy a 60-year career working domestically and internationally sharing his knowledge and expertise. James exemplified the true meaning of fatherhood and family by instilling the core values of hard work, education and importance of family. He was a listener, teacher, protector and motivator. He loved a good home-cooked meal, watching sports and fast cars. Visitation will be held Monday, January 24, 2022, from 5:00pm - 7:00pm at Griffin-Roughton Funeral Home. Funeral service will be 10:00am Tuesday, January 25, 2022, at Griffin-Roughton Funeral Home with Tony Hargrove officiating. Burial will be 9:00am Wednesday, January 26, 2022, at Dallas Ft Worth National Cemetery. Funeral service can be viewed at: http://webcast.funeralvue.com/events/viewer/67927 Code 67927

James Montgomery, 84, of Dawson, Texas passed away on January 15th surrounded by his closest family members. He was born June 11, 1937, in Dawson, Texas to Herman and Tressie Hargrove Montgomery. James is survived by his wife, Pamela Montgomery;... View Obituary & Service Information

The family of James Montgomery created this Life Tributes page to make it easy to share your memories.

James Montgomery, 84, of Dawson, Texas passed away on January...

Send flowers to the Montgomery family.