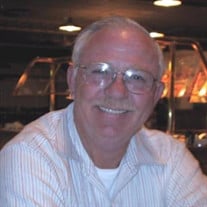 James David Huffstetler went home to the Lord Tuesday, March 29th, 2022 at the age of 73 years old. He was born September 23rd, 1948, in Waxahachie, Tx. to James H Huffstetler and Charleine Agee. James was raised in Lancaster, TX, graduating from Lancaster High School, and joining the United States Navy after Graduation. While stationed in Italy, he met Betty Bottum, whom he would later marry and start a family. After marriage, they came back to Texas, and settled down in Seven Points, before moving to Corsicana. They were married 44 Years before Betty’s Passing in 2014. In 2015, he would marry Johnnie Mitchell, with whom he would be with until his death in 2022. An avid outdoorsman, James would enjoy fishing, hunting, gardening, and working with various livestock in his earlier years. He was also a musician, singing since he was young. He helped form the southern gospel group, The Laymen, where he sang Bass for many years. He worked as a truck driver for Central Freight Lines in Corsicana, a Deputy Sheriff for the Navarro County Sheriff's Office, and after 15 plus years with the NCSO, settled into the ministry pastoring at Harmony Missionary Baptist Church in Corsicana, and Kirvin Baptist Church while also serving as a chaplain for the V.A. Hospital. In addition to his parents, he was predeceased by his wife, Betty Huffstetler, his daughter, Patty Huffstetler-Tyndale, his Brother, Dennis Huffstetler, and his Step-Mother, Grace Huffstetler. He is survived by his wife, Johnnie Mitchell Huffstetler, of Whitney; Son James Michael Huffstetler and his wife, Elizabeth Rochelle, of Waxahachie; Brothers John and Edward Huffstetler, Sister, Sarah Mapstone, Granddaughter, Catherine Huffstetler-Tyndale, Grandson, Daniel Huffstetler, and many more nieces and nephews. Visitation will be held from 5:00-7:00 PM, Sunday, April 3rd at Griffin Roughton Funeral Home, 1530 North 45th Street, Corsicana, Tx 75110. Funeral Services will be held 11:00 AM Monday, April 4th at Central Baptist Church, 1100 Old Bynum Road, Hillsboro, Tx 76645.

The family of James David Huffstetler created this Life Tributes page to make it easy to share your memories.

Send flowers to the Huffstetler family.