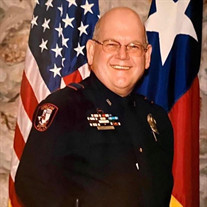 I have fought the good fight, I have finished the race and I have kept the faith. Now there is in store for me the crown of righteousness, which the Lord, the righteous Judge, will reward to me on that day and not only to me, but also to all who have longed for his appearing. 2 Timothy 4:7-8 James Lee Hudson, 69 of Corsicana was called home to take his place in glory on Wednesday, December 2, 2020. James was born July 3, 1951 along with his identical twin brother Don in Waco, Texas to John and Rosalee Hudson. Growing up James and Don were known for their many practical jokes especially their favorite of switching places with each other. When the two of them were together you could always count on a good laugh and never a dull moment. James graduated from Mexia High School in 1970, and went on to attend Navarro College to earn his Associates degree in law enforcement. James took great pride in his role as a leader in the community and was a beacon of light to those who crossed his path. He started his career with the Marlin PD in 1973 and had been with Corsicana PD from 1980 until he honorably retired in June of 2016 as a Master Peace Officer, the highest certification an officer can achieve. Through his many years as a Police Officer he gained an abundance of knowledge through extensive training that eventually led him to be a D.A.R.E instructor. James assumed the role of D.A.R.E officer in 1991. Throughout the program James made a difference in the lives of many of Corsicana's younger citizens who to this day will share fond memories of Officer Hudson and the D.A.R.E program. He led a remarkable life of courage and compassion through his career. He never met a stranger and was a friend to anyone he met. James lived life to the fullest. He loved to travel, watch scary movies, pull a good prank, loved football and baseball, but his greatest joy came from his own personal family and that of his law enforcement family. He is preceded in death by his parents John and Rosalee Hudson, his wife Lorrie Hudson and granddaughter Micaela Elizabeth Lewis. Those left to cherish his memory are brothers Don Hudson and wife Linda of Corsicana and John Hudson; daughters, LaDonna Lewis and husband Brad of Grandview, Jamie Pettigrew and husband Jeff of Mart, Megan Murphy and husband Dustin of Corsicana; grandchildren, Austin, Madyson, Hunter, Emma, Staci and Brenton; also his special niece, Sarah Jones and two nephews, Jeremy Hudson and Jason Hudson. Visitation will be Tuesday, December 8, 2020 from 12-2pm with funeral services to follow at 2pm at Griffin-Roughton Funeral Home in Corsicana. Interment will follow at Oakwood Cemetery. In Lieu of flowers donations may be made to The Humane Society of Navarro County, P.O Box 1734 Corsicana, Tx 75151

I have fought the good fight, I have finished the race and I have kept the faith. Now there is in store for me the crown of righteousness, which the Lord, the righteous Judge, will reward to me on that day and not only to me, but also to all... View Obituary & Service Information

The family of James Hudson created this Life Tributes page to make it easy to share your memories.

I have fought the good fight, I have finished the race and I...

Send flowers to the Hudson family.