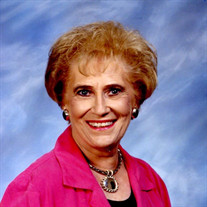 Ina Balentine Jones, 91, passed away on Wednesday, September 30, 2020 at Twilight Nursing Home. Ina was born on April 21, 1929 to Lorena & Ralph Balentine in Corsicana, TX. At the young age of fifteen, Ina met the love of her life, Curtis Jones at the Corsicana State Home, where her parents worked. The two were together and raised three children until his death in 1977. Ina graduated with her B.S. in Education from North Texas State University in 1947. She would later go on to obtain her Master’s Degree from East Texas State University in Library Science. Ina began her 48 year career in education as a teacher for Corsicana ISD. She eventually went on to become the District Librarian where she worked until retirement. Ina was a member of the Association of Texas Professional Educators and Delta Kappa Gamma. As a lifelong member of the First United Methodist Church of Corsicana, Ina belonged to the Friendship Sunday School Class and served on many church committees including United Methodist Women. She enjoyed volunteering in her community and participated in several service organizations. Kinsloe, House, March of Dimes, and the American Cancer Society are just a few of the many organizations she enjoyed volunteering for. Ina was outgoing and a friend to all she met. In her free time she loved to read, travel, walk, and create jewelry. If asked, Ina would have told anyone that life’s greatest treasure was her family. Above all else she loved spending time with them and carrying on family traditions. Ina was preceded in death by her beloved husband Curtis, parents Lorena & Ralph Balentine, brother Ralph Balentine, and son in law, Steve Erwin. She is survived by her son Don Jones (Lucy), daughter Cindi Horton (Bill), son Jeff Jones (Mandi), her sister JoAnn McCrory, sister in law Verlene Balentine, grandchildren Curt Jones, Hillary Rohe (Kenneth), Stan Jones (Brandy), Summer Jones, Hunter Jones, great grandchildren Addie, Brooke, & Harrison Jones and Rob, Blaire, & Kendall Rohe, along with numerous cousins, nieces, and nephews. The family wishes to extend our sincere thanks to the staff of Twilight Nursing Home. Memorial can be made in Ina's name to the American Cancer Society - Navarro County Unit Celebration of Life for Ina Jones will be Wednesday, October 7, 2020 at 1:00pm in the Chapel at Griffin - Roughton Funeral Home. Visitation will be from 12noon till service time. Burial will follow at Resthaven Memorial Park.

Ina Balentine Jones, 91, passed away on Wednesday, September 30, 2020 at Twilight Nursing Home. Ina was born on April 21, 1929 to Lorena & Ralph Balentine in Corsicana, TX. At the young age of fifteen, Ina met the love of her life, Curtis... View Obituary & Service Information

The family of Ina Jones created this Life Tributes page to make it easy to share your memories.

Send flowers to the Jones family.