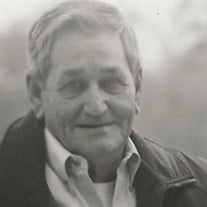 Hugh “Tom” Lambert 82, of Corsicana, died at his residence on January 18, 2021 in Corsicana, Texas. Tom was born in Frost, Texas to Dock and Mary Lambert on February 4, 1938. He attended school at Frost and Rosenberg ISD. He married George Ann Webb on February 7, 1958. He retired from Chattanooga Glass, later known as Anchor Glass for 25+ years. He loved and raised horses and was a member of the Texas Quarter Horse Association. He also loved being at home where he spent years creating and building with his father by his side. Tom is preceded in death by his parents; Dock and Mary Lambert, Sisters; Frances Foss, Martha Johnson and Judy Blackwell, Brother-in-law; Glynn Johnson, Niece; Carla Watson, Nephew; Mike Gates, and his first daughter; Robbin Lambert Gee. Tom is survived by his wife of 62 years; George Ann Webb-Lambert, sister; JoAnn Hartfiel of Rosenberg, Texas, Daughter; Dyan Lambert, “Grandy” to his Grandchildren; April and Jason Tracton, Taylor and Jeremy McRae, Rachel and Landry Shepherd, Rebecca and Alfredo Rojas, Great-Grandchildren; Sutton Tracton, Witten and Wyatt McRae, Karleigh and Parker Shepherd, Rayden, Adelyn and Beckam Hernandez, Maya, Sammy and Jordan Rojas. Tom spent the last years doing exactly what he wanted, sitting in his recliner watching every old western movie in black and white over and over ringing his bell asking George “what’s on the menu?’ The family of Tom Lambert wishes to extend our sincere thanks to Maranda Hipp of New Century Hospice, who became a good friend and took all of Tom’s picking with a smile. A celebration of life will be scheduled for a later date.

The family of Hugh Tom Lambert created this Life Tributes page to make it easy to share your memories.

Hugh “Tom” Lambert 82, of Corsicana, died at his residence on...

Send flowers to the Lambert family.