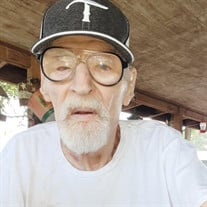 Henry Sefret Parrish, 83 of Purdon, passed away Thursday, September 16, 2021 at his home with his family by his side. He was born February 26, 1938 in Coppell, Texas to Vert Sefret Parrish and Allie Miram Moore Parrish. He married his love Eula Mae Young in 1962. Henry enjoyed spending time with his family, especially his grandchildren, they were his joy. He would collect cans and give the money to his grandchildren to spend or save. He enjoyed coon hunting and spent many days hunting with his bestfriend John Ledbetter. Henry loved the outdoors, he liked to ride and look at the wildlife on Pisgah Ridge, looking for the Buffalo or anything else his could see. He also enjoyed trains, from the history of trains to going with grandchildren and watching the trains pass by and counting the cars. Henry and Eula also enjoyed spending time at First Monday Trades Day where they would set up a booth and sell items. Henry was a "Good Ole Country Boy" and is going to be missed by his family and all who knew him. He is preceded in death by his parents; brothers, Howard E. Parrish and Glen Edward Parrish; sisters, Mary Almeda Girvin and Janie Ruth Welch. He leaves behind to cherish the memories, wife of 59 years, Eula Mae Parrish; children, Donna Brooks, Aubrey Parrish and wife Janet, Jeffrey Parrish and wife Darleta. Grandchildren, Leaonard Brooks Jr. and wife Bobbie, Christopher Brooks and wife Valerie, Aubrey Parrish Jr., Andy Parrish and wife Amy, Ell O'glesby and husband Dusty. 14 Great grandchildren and 7 great great grandchildren. Brother in law, Jack Girvin and sister in law, Jacquelyn Parrish. Numerous nieces, nephews and extended family and friends. Visitation will be 6:00 pm - 7:30 pm Monday, September 20, 2021 at Griffin-Roughton Funeral Home. Graveside service will be 1:00 pm Tuesday, September 21, 2021 at Parrish Family Cemetery in Coppell with Tim Cooke officiating. The family would like to thank Hand in Hand Hospice, Jackie, Amy and Brittany for their care and compassion. Also, thank you to all the family and friends for the prayers, calls and text.

Henry Sefret Parrish, 83 of Purdon, passed away Thursday, September 16, 2021 at his home with his family by his side. He was born February 26, 1938 in Coppell, Texas to Vert Sefret Parrish and Allie Miram Moore Parrish. He married his love... View Obituary & Service Information

The family of Henry S. Parrish created this Life Tributes page to make it easy to share your memories.

Send flowers to the Parrish family.