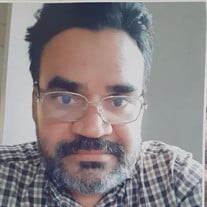 Hector Chavez Rendon, 50, passed away on Sunday, August 8, 2021 in Somerset, PA. He was born on May 1, 1971 in Tanchachin, SLP, MX. He was the second of seven to Taurino Chavez and Alicia Rendon. As a child, Hector was a leader and protector to his siblings. He set himself at a higher standard, showing his brothers what kind of men they should become. At the age of 16 he immigrated to the United States with the hopes of providing a better life for his parents and siblings. He thought he was a man, but he would soon come to find that he was nothing but a child. Regardless he didn't give up, and with hard work and perseverance he was able to provide for the family he left behind. Hector believed in the American Dream and after some time in the United States, he became a citizen. In his early twenties Hector met Clara Darlene and her daughters, Angel, Becky and Savannah. Hector and Clara were soon married, and while Hector never had any children of his own, he soon became a father figure to the girls. After many years together, they decided to part ways. In the early 2000's Hector became a truck driver, traveling to every state except Hawaii and Alaska. Hector also traveled from the United States to Mexico frequently. He owned a property that he maintained and during one of his trips he found love again, meeting Margarita Sierra, who was his partner until he was called to be with our heavenly father. Hector was a wise man who gave meaningful advice and was always looking out for his family. He was a stern, hard working man with many hobbies-all of which were work. He had a love for mechanics, fishing, construction, welding and agriculture. Hector was also a loving man, who is survived by his partner Margarita Sierra, his parents Taurino Chavez and Alicia Rendon, his brother Damian Chavez and his wife Maribel Chavez along with their daughters Alondra, Mariell and Kassandra; his sister Elvia Briceno and her children, Margarita, Maria, Julio and Ashley; his brother Alejandro Chavez and his wife Nora Medina and their children, Rosita, Patricia, Juan Pablo and four small children who did not get the chance to meet their uncle. He is also survived by his sister Maria Briceno and her husband Julian Briceno, along with their children Anita, Julian and Julieta; his brother Nau Chavez and his children Alicia Lopez and Nau Chavez; his brother, Alfredo Chavez and his sons Diego and Josue; seven great nieces and nephews, aunts, uncles, and cousins. Hector was a beloved son, brother, nephew and uncle. He will be forever missed and loved.

Hector Chavez Rendon, 50, passed away on Sunday, August 8, 2021 in Somerset, PA. He was born on May 1, 1971 in Tanchachin, SLP, MX. He was the second of seven to Taurino Chavez and Alicia Rendon. As a child, Hector was a leader and protector... View Obituary & Service Information

The family of Hector Chavez Rendon created this Life Tributes page to make it easy to share your memories.