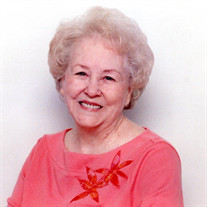 On March 29, 2020, Hazel Ruth Holloway passed from this life. She was lovingly attended by nurses and aids from New Century Hospice and nurses and staff of Legacy West in Corsicana. Ninety-three years ago on September 19, 1926, a daughter was born Ira Alva and Willie Elizabeth Monroe, a poor sharecropper family in Corbet, Texas. The baby girl was named Hazel Ruth, the youngest of seven sisters. Hazel grew up knowing the hardships of the Great Depression and WWII and became one of America's "Greatest Generation." At the age of nineteen Hazel, who had never left the county wherein she was born, traveled to Washington, D.C. to serve in the Pentagon as a clerk to do her part in the war effort for America. After the war's end, Hazel returned to Navarro County Texas, where she became a telephone operator in Corsicana, the county seat. There she met a young U.S. Navy war veteran named John William Russell, the son of a farmer and landowner in the same county. The young couple soon married and by 1951 had two sons, Johnny Monroe and eldest and Wesley Glen his younger brother. Later in life Hazel and John divorced. Hazel then married Richard Talmage Holloway, a veteran of the U.S. Air Force in WWII. Hazel and Richard "Bubba" Holloway had a son and named him Richard Talmage after his father. From Hazel were born three sons and four grandchildren: Leigh Ann Russell Lewis, Dustin Martin Russell, Hagen Thomas "Lewt" Holloway, and Trey Richard Holloway. Hazel was also blessed with five great-grandchildren; Quenton Seth Lewis, Linzie Nicole Lewis, Lex Kade Lewis, Addison Nova Holloway, and Waylon Tripp Holloway. Hazel, the matriarch of our family, was blessed with two loving daughters-in-law: Carolyn Ann Coker Russell, wife of Johnny, and Daisy Sylvia Carson Russell, wife of Wesley. We, the sons of Hazel, are the product of a little girl born into poverty, raised during the darkest of days of the twentieth century, who rose above all challenges to rear three boys to become -- each in his own way -- responsible, respectable, and patriotic Christian men. For your lifetime of love and labor, we are forever in your debt. We, the fortunate sons and our families, all love you so. By Johnny the eldest of Hazel's three sons. Visitation will be held Wednesday, April 1, 2020 from 9:00 am - 1:00 pm at Griffin-Roughton Funeral Home. Private Family Interment will be at Hamilton-Beeman Cemetery with Bro Gary Johnson officiating.

On March 29, 2020, Hazel Ruth Holloway passed from this life. She was lovingly attended by nurses and aids from New Century Hospice and nurses and staff of Legacy West in Corsicana. Ninety-three years ago on September 19, 1926, a daughter was... View Obituary & Service Information

The family of Hazel Holloway created this Life Tributes page to make it easy to share your memories.

Send flowers to the Holloway family.