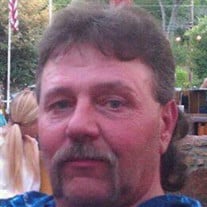 Harold Wayne Hocutt Sr, 57, of Barry, Texas went to be with the lord surrounded by family at his home on November 30, 2021. He was a loving husband, dad, papa, brother, uncle, cousin, and friend. He loved his family fiercely and we will miss him dearly. You will live in our hearts until we are reunited again. Harold was born in Cuero, Texas on November 24, 1964 to Harold Hocutt and Dorothy Mae Sitka. His mother gained her wings when Harold was just two years old. His father remarried and Harold was raised by his mother Sue Hocutt. He met the love of his life in the summer of 2007 at Bill’s Fried Chicken. Harold and D’Ann Hocutt were married June 22, 2012. Together their love joined two families into one. During their journey they have been blessed with five children and nine grandchildren. He is preceded in death by his mother Dorothy Mae Sitka, his father Harold Hocutt, and his brother Bubba Worthington. He is survived by his wife D’Ann Hocutt. His son Bubba Hocutt and wife Allie. His daughter Amber Hocutt. His son Chris Rodgers and wife Kaley. His daughter Stephanie Chiselbrook and husband Chiz. His daughter Britney Bennett. His nine grandchildren Cheyenne, Nolan, Easton, Waylon, Austin, Aiden, Landry, Lilly, and Emmitt. One bonus granddaughter Ava Rose. He is also survived by his mother Sue Hocutt, brother Richard Hocutt, sisters Beth Anderson and life partner Candace, Michele Graham and husband Charles, Debbie Green and husband Gary, Karen Moon, Brenda Hallabough, and Jane Gray. He leaves behind several nieces/nephews, cousins, and friends who loved him dearly. Visitation will be Saturday, December 4th from 12:00pm-1:00pm at Griffin-Roughton Funeral Home Chapel. Funeral will follow visitation at 1:00pm in the chapel. Burial will be at Dresden Cemetery. Pallbearers will be Bubba Hocutt, Chris Rodgers, Evan Anderson, Hunter Joe Hocutt, Brandon Fisk, and Josh Hocutt. Honorary Pallbearers will be family and close friends.

Harold Wayne Hocutt Sr, 57, of Barry, Texas went to be with the lord surrounded by family at his home on November 30, 2021. He was a loving husband, dad, papa, brother, uncle, cousin, and friend. He loved his family fiercely and we will miss... View Obituary & Service Information

The family of Harold Wayne Hocutt Sr. created this Life Tributes page to make it easy to share your memories.

Send flowers to the Hocutt family.