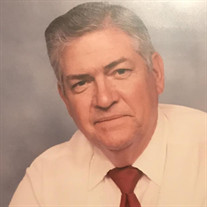 Gordon L. Griffin Sr., of Blooming Grove, Texas, passed from this life at home with his family by his side on Friday, January 1, 2021. A celebration of his life will be Sunday, January 3, 2021 at 2:00pm at Central Baptist Church in Blooming Grove with Bro. Darren Heil officiating. Visitation with the family will be prior to the service from 1 - 2 pm. Burial will follow at a later date. Gordon Lawrence Griffin Sr. was born October 7, 1928 in Rosebud, TX and departed this life on January 1, 2021 at his home in Blooming Grove, TX at the age of 92 years, 2 months and 24 days. He was preceded in death by his wife of 65 years & 8 months , Sammye Elizabeth Barham Griffin of Blooming Grove, by one infant son, Gary Lee Griffin, by his parents, John C. and Augusta Griffin of Marlin , TX, and by four brothers and three sisters. He is survived by two sons and their wives, Gordon & Debra Griffin of Blooming Grove, TX and Robert & Lisa Griffin of Memphis, TN, as well as, by four grandchildren, Brandi Griffin, Jayne Griffin, Kyle & Kristen Griffin and Erik & Caitlin Griffin, and by ten great grandchildren, Dean, Duke, Dash, Griffin , Kingsley, Paxton, Ayden, Emery, Nathan and Brennan, along with many cousins, nieces and nephews all of whom he dearly loved. Gordon retired as a Master Sargent after 23 years in the Air Force, and retired again with 20 years of service with the Texas Youth Council in Corsicana. He was a member and deacon of Central Baptist Church in Blooming Grove, a member of the BG Crime Watch, the Historical Society, the Lion’s Club, and he was a Mason for over 66 years. He served on the Blooming Grove City Council from 1973 - 1975 and again from 1983 - 1987. He served as Mayor Pro-Tem from 1984 - 1986. Gordon was well known in the community for visiting the sick at home and in the hospitals and nursing homes, and for attending more funerals than can be counted. He was also infamous for loving to tell jokes, but not being able to finish the punchline without cracking up in laughter himself. Above all else, Gordon was a man of Christian faith and good character who loved his wife, family, country and the City of Blooming Grove above all else. He will be missed.

Gordon L. Griffin Sr., of Blooming Grove, Texas, passed from this life at home with his family by his side on Friday, January 1, 2021. A celebration of his life will be Sunday, January 3, 2021 at 2:00pm at Central Baptist Church in Blooming... View Obituary & Service Information

The family of Gordon L. Griffin Sr created this Life Tributes page to make it easy to share your memories.

Send flowers to the Griffin family.