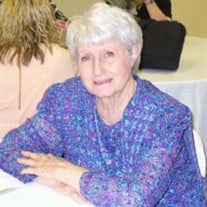 Geraldine O’Shay was born to Charlie and Gertrude Cranford on December 20, 1932, in Powell, TX, during the Great Depression. She grew up with her younger sister and best friend, Louise Kuykendall. Life was very hard during those times. She worked many endless days in the cotton fields along side her family to make ends meet. Geraldine went on to be married and start a family. She worked various jobs such as Adam’s Hat Factory and Corsicana Cleaners before becoming a secretary at The Salvation Army, where she worked and attended church faithfully for well over 30 years. After retiring from The Salvation Army, she worked for Family Services where she continued her many years of service to the community. Geraldine enjoyed researching her family genealogy and trying to imagine the far away places that her ancestors immigrated from to The United States. The farthest back she got in her research was to her Great great great grandfather, Christopher Columbus Edinburgh, who migrated here from France. He became a citizen of Texas in 1824, where he became a scout for and good friend of Sam Houston and fought alongside him at The Battle of San Jacinto. She also was an avid lover of gardening and all things nature, especially of hummingbirds. Her eyes would light up with excitement when she saw the first hummingbird of the season at her feeder. Geraldine was an amazing Christian woman and wonderful Mother to her five children. She is survived by her son, James DeMoss and wife, Tricia Demoss, and daughter’s, Cindy Young, Lisa Gilmore, and Amy O’Shay Sotelo and husband Rene Sotelo as well as grand-children, Audra Gorden, Holly Hooser, Stacy Gelski, Bradley Husdon, Jared Young, Jonathan Young, Alyssa Sanchez, and Taya Sotelo and many great and great great grandchildren. She is preceded in death by her parents, sister, Louise Kuykendall, and daughter, Marcia Demoss among many others that went before her. Visitation 6-8pm Wednesday, Sept. 30th at Griffin-Roughton Funeral Home. Funeral Service 1pm Thursday, October 1, 2020 at Griffin-Roughton Funeral Home. Burial at Oakwood Cemetery.

Geraldine O&#8217;Shay was born to Charlie and Gertrude Cranford on December 20, 1932, in Powell, TX, during the Great Depression. She grew up with her younger sister and best friend, Louise Kuykendall. Life was very hard during those times.... View Obituary & Service Information

The family of Geraldine O'Shay created this Life Tributes page to make it easy to share your memories.

Geraldine O’Shay was born to Charlie and Gertrude Cranford on...

Send flowers to the O'Shay family.