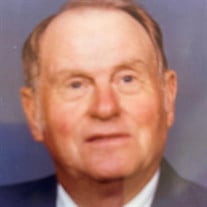 George Alvis Patterson, 96 of Fairfield, passed away on February 9, 2022 at home with his family by his side. George was born May 16, 1925 in Wortham to George Reese and Minnie Belle Patterson. George joined the Army when he was 18 to serve in World War II in Germany, Italy and France. He returned home to marry the love of his life, Mary Jo Crook and they have been married for 74 years and 8 months. Together they have 2 daughters Dianne and Joanne. George was a dedicated Christian, Husband, Father, Grandfather, Great Grandfather, Deacon and friend. George loved to be with his family for holidays and activities. He especially enjoyed fishing, hunting, working in his garden and working with his cows. He was a member of Calvary Baptist Church in Fairfield where he served as a Sunday School teacher, leader, and Deacon for many years. He loved the Lord and his Church family. George worked for many years as a Plant Operator and Maintenance Supervisor at Northern Propane Underground Storage. He is preceded in death by his parents George and Minnie Patterson; brothers, Artthur, Bernard, Sydney and Preston Patterson; sisters, Nell Burleson, Clarice Chambers and Mary Ridge. George is survived by his wife, Mary Jo; daughters, Dianne Parks and husband Ken of Kilgore; Joanne DeMoss of Fairfield; grandson Justin Parks and wife Jamie of Lufkin; granddaughter, Nikki Snider and husband Jeff of Prosper; grandson Josh DeMoss and Suzanne of Fredericksburg; great grandchildren, Case, Coulter, Jaxson, Kemper, Hannah and Haylie; sister Jeannie Trojacek of Ennis; sister in laws, Liddie Chapman of Wortham, Earlene Patterson of St. Cloud, Florida and several nieces and nephews. He will be greatly missed by his family. Viewing will be 12:00 pm - 2:00 pm Monday, February 14, 2022 at Griffin-Roughton Funeral Home. Graveside funeral service will be 3:00 pm Monday, February 14, 2022 at Antioch Cemetery with Brother Terry Skinner and Brother Shelby Race officiating. Pallbearers will be Lindale Phillips, Marvin Mullen, Elton Moore, Mark Chavers, Jerry Don McLeod and Larry Davis. Honorary Pallbearers will be Justin Parks, Josh DeMoss, Jeff Snider, John Ross Pye, Clois (Buddy) Mullen and Curtis Red.

George Alvis Patterson, 96 of Fairfield, passed away on February 9, 2022 at home with his family by his side. George was born May 16, 1925 in Wortham to George Reese and Minnie Belle Patterson. George joined the Army when he was 18 to serve... View Obituary & Service Information

The family of George A. Patterson created this Life Tributes page to make it easy to share your memories.

George Alvis Patterson, 96 of Fairfield, passed away on February...

Send flowers to the Patterson family.