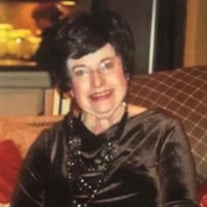 Gayle Skaggs, 79 years old, passed away on Sunday, March 29, 2020, peacefully with her husband of fifty-five years by her side at their home in Streetman, Texas. She was born January 2, 1941 in Los Angeles, California to Dean and Louise Ashcraft of LaCañada, California. She attended Glendale High School and then Glendale College. She volunteered as a candy-striper at the Adventist Hospital in Los Angeles, and worked at Southern California Edison. She married her high school sweetheart, Wayne Skaggs, December 12th, 1964. Together they lived in San Diego, California; St. Louis, Missouri; Dallas, Texas; Krum, Texas; LaVeta, Colorado, and eventually Streetman, Texas. Their son, Michael, was born in California in 1970, and their daughter, Karen, in Texas in 1972. Gayle was a student of etiquette and entertaining guests. She loved to throw parties, and –more than most – loved the cooking and the preparation that went into it. She cooked with spontaneity and creativity – not from recipes and duty. She delighted in having people over – anybody really. Hospitality was her love language. She was the best Room Mom, Dance Mom and Football Mom. She found joy in being involved in whatever her kids were doing, and getting to know the other moms. She was a great decorator, seamstress, and costume maker, and she enjoyed gardening and bird-watching too. Gayle was a devout Christian, and attended Bible Study Fellowship for many years. She savored her time spent reading her bible and writing in her prayer journal. She and Wayne attended Denton Bible church from its foundational years, and for many years until they left their Krum, TX location. She is preceded in death by her mother and father. She is survived by her husband Wayne, son Michael of Haslet, and daughter Karen and her Husband Doug of Denton, and her beloved grandchildren: Juliet, Jake, Jude, Jolie, and Amelia. She is also survived by her brother Kent Ashcraft and wife Becky of Minden, Nevada, and niece Erin Ashcraft and her fiance Travis Mason of Justin, Texas.

Gayle Skaggs, 79 years old, passed away on Sunday, March 29, 2020, peacefully with her husband of fifty-five years by her side at their home in Streetman, Texas. She was born January 2, 1941 in Los Angeles, California to Dean and Louise Ashcraft... View Obituary & Service Information

The family of Gayle Skaggs created this Life Tributes page to make it easy to share your memories.

Send flowers to the Skaggs family.