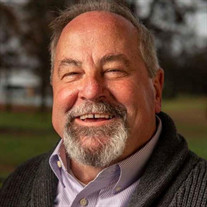 On Monday, September 7, 2020, Gary D. Guthrie, loving husband, father, grandfather, and friend, passed away at the age of 64. Gary was born January 19, 1956 in Indianapolis, Indiana to his parents, Robert and Armilda Guthrie. The family moved from Indiana to Imperial Beach, California in 1962 before settling in Chula Vista, CA in 1970. Gary received his bachelor’s degree in Business Administration from National University in 1983 and his master’s degree in Organization Leadership from Point Loma Nazarene University in 2017. Gary worked for the Chula Vista Police Department for 23 years before retiring as a Sergeant in 2009. He was named San Diego County Peace Office of the year in 1994. Upon retirement from the police department, Gary became an adjunct professor for the Department of Administration of Justice at Southwestern College and, subsequently, at Point Loma Nazarene University. Gary married his wife, Leslie, in Kauai on April 9, 2006. Together they created a blended family with Gary and Leslie each having two children from previous marriages. Gary and Leslie spent his remaining year of life at their dream retirement home on the lake in Corsicana, Texas. Gary was preceded in death by his father, mother, and older brother, Robert. He is survived by his wife, Leslie, his son, Matthew (Jessica) Guthrie, his daughter, Allison (Jerid) Anderson, his stepdaughter, Lauren (Michael) Brandon, and his 4 grandchildren. In lieu of flowers, the family requests donations be made in Gary’s honor to Melanoma Research Foundation, to support the effort to transform melanoma from one of the deadliest cancers to one of the most treatable. The link to Gary’s memorial page can be found at https://memorial-fundraising.everydayhero.com/us/memorial-page-for-gary-guthrie. Memorial Service will be held 10:00am Saturday, September 26, 2020 at Grace Community Church Warehouse 227 N Beaton St, Corsicana, Texas 75110

On Monday, September 7, 2020, Gary D. Guthrie, loving husband, father, grandfather, and friend, passed away at the age of 64. Gary was born January 19, 1956 in Indianapolis, Indiana to his parents, Robert and Armilda Guthrie. The family moved... View Obituary & Service Information

The family of Gary Dale Guthrie created this Life Tributes page to make it easy to share your memories.

Send flowers to the Guthrie family.