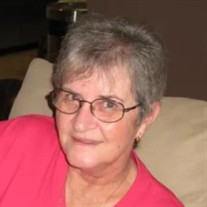 On November 26, 2021 at sunrise, the gates of heaven opened up to accept Gail Summerall Richards as an Angel. We will miss you dearly, but we have peace in knowing that you are not suffering any longer. Your Angel spirit will live on, in the many lives of those you touched through the many different ministries that you were involved in. Gail Stan Summerall was born on May 23,1951 in Corsicana, TX to Stanford Reese Summerall (Father), and Nell Margene Allbritton Summerall (Mother). Gail went to school in Corsicana, TX. She married Ervin Leslie Richards on October 8,1971. They were married 50 years. She loved him and her family with all her heart. Gail ‘s children include: Dennis Ervin Richards, Terry Manual Richards, and stepchildren: Randel Ervin Richards and Angela Richards McCarter. Gail’s education included an Associates degree from Navarro College, and attendance at UTA with a concentration in Microbiology. Gail and Ervin ran Richards Gulf Station for 12 years. She worked at Wolf Brand Chili in the lab. Then she moved to Cryer Creek Kitchens of Collin Street Bakery and retired from Russell Stover Candy Factory. Gail served in many organizations including the Boys Scouts of American and as Worthy Matron of Eastern Star. In Boys Scouts she was Cub Scout Leader and a Boy Scout Leader. She earned her Wood Badge in 1987 and received the Silver Beaver award from Circle Ten Council in 1998. Gail and Ervin became principal sponsors of a venture crew known as “Crew 1298”. This program was successful and very quickly became the premier High Adventure Co-Ed program in Circle Ten Council of the United States because of the many programs that it entailed. “Crew 1298 “was recognized internationally by a visit from the Chief Scout of Ireland. Upon retirement, Gail continued to serve our troops in “Chuckwagons for Christ” and then through “Cowboys for Heroes. Her dedication and service will to remain unmatched. Gail enjoyed most of all time with her husband, children, family and pets. She was member of First Methodist Church in Corsicana, Northside Baptist Church and 1298 Ministries. Gail is survived by her Husband Ervin Richards, Children: Dennis and Laura Richards, Terry and Emily Richards, Randy Richards and Jackie Evette, Angela and Michael McCarter. Grandchildren includes Jordan Richards, Mandy Richards, Stephanie Richards, Justin Richards, Taylor Richards, Isabella Richards, Brynlee Richards, McKenzie Evette, Chandler Ware, McKenna Evette, Carson Castillo and Mia Castililo. Gail’s sisters are Jeanie Ruth Hodge and Patti Lynn Summerall, and her Aunt Bobbie McCreary. Gail has many extended family members and friends that she loved and called family. Memorial Service to be announced at a later date.

On November 26, 2021 at sunrise, the gates of heaven opened up to accept Gail Summerall Richards as an Angel. We will miss you dearly, but we have peace in knowing that you are not suffering any longer. Your Angel spirit will live on, in the... View Obituary & Service Information

The family of Gail Summerall Richards created this Life Tributes page to make it easy to share your memories.

Send flowers to the Richards family.