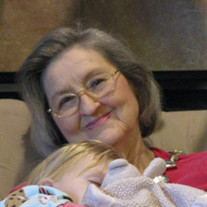 Freda Mae Boyer Whiteside, 91 of North Richland Hills, (formerly of Corsicana) Texas passed away Monday Dec 21, 2020. Visitation will be at Griffin-Roughton Funeral Home in Corsicana, Texas on Wednesday Dec 29 and Services will be at 11:00 AM Thursday Dec 31 at Griffin-Roughton Funeral Home Chapel. Interment will follow at Oakwood Cemetery. Freda was born September 13, 1929 in Bedford, Texas, the youngest of three girls. A highly intelligent child, she began school a few weeks before her 6th birthday, skipped one grade, and graduated from Euless High School at age 15 as class Valedictorian. In December of 1952, she married Rex Whiteside, whom she met on a blind date. They had three children, and when the youngest began school, Freda began working on the college education that was not affordable for her earlier. Freda loved children and was passionate about helping them fulfill their potential. She received a bachelor’s degree from Baylor University and became an elementary school teacher. She took classes in the summers to earn her special education certification and took classes at night to earn her master’s degree from Baylor University. She spent her career teaching and supervising in special education in Hillsboro Schools and as a consultant in early childhood intervention in the South-Central Texas Region. She was married to Rex Whiteside for 49 years until his passing in 2001. They were active faithful members of First Baptist Church, Corsicana. Freda was fiercely independent and adventurous. Although a series of strokes robbed her of her independence, she never lost her love of reading, especially mysteries, her wonder at the natural world, or her spirit. Survivors: daughters, Cindy Fitch (husband, John) of Morgantown, WV and Sherri Pyron (husband, Troy) of North Richland Hills, TX; son Doug Whiteside (wife, Gina) of Colima, MX.; six grandchildren and 5 great-grandchildren. Memorials may be given to: First Baptist Church, 510 W. Collin, Corsicana, TX 75110.

Freda Mae Boyer Whiteside, 91 of North Richland Hills, (formerly of Corsicana) Texas passed away Monday Dec 21, 2020. Visitation will be at Griffin-Roughton Funeral Home in Corsicana, Texas on Wednesday Dec 29 and Services will be at 11:00... View Obituary & Service Information

The family of Freda Whiteside created this Life Tributes page to make it easy to share your memories.

Send flowers to the Whiteside family.