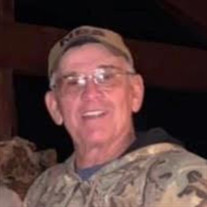 Franklin Eugene Smith, 77, of Frost passed away January 11, 2022 at Baylor Hospital in Waxahachie. He was born on September 18, 1944 in Oklahoma City, Oklahoma to the late Sky Smith and Margaret Emogene Smith. Frank was a good Christian father who raised his family in the shadow of Jesus Christ. He loved his wife of 59 years, Carolyn Smith, until the day he took his last breath. His children were the light in his life and he was loved by many. He spent most of his working career in the construction business and was currently employed with Helena Chemicals. The simplest pleasures in life brought great joy to Frank. He loved his “camp fire” outside the back door and wanted everyone to join him and listen to his jokes. Most of the time he ended up out there by himself because we had all heard that joke already… Anyone who crossed paths with Frank knew that he loved to make people laugh. He had a warm heart and would do anything for others. His work ethic and dedication were unmatched. He is preceded in death by his late parents, his brother, Bud Smith, and by his daughter, Tracey Smith Verdun. Survivors include, wife, Carolyn Smith; children, Cory Smith and wife Donna, Scott Smith and wife Deena; grandchildren, Colby Smith, Aaron Verdun and wife Katie, Bryson Smith and wife A’Lara, Gracie Smith, Garret Smith. Frank had 7 great grandchildren, numerous nieces and nephews and people who he called friends. Services will be held on Saturday, January 15, 2022 at the Cowboy Church of Corsicana. Visitation will begin at 12 p.m. followed immediately by the funeral at 1 p.m. Pastor Derek Rogers and Brother Charles Wilson will officiate.

Franklin Eugene Smith, 77, of Frost passed away January 11, 2022 at Baylor Hospital in Waxahachie. He was born on September 18, 1944 in Oklahoma City, Oklahoma to the late Sky Smith and Margaret Emogene Smith. Frank was a good Christian father... View Obituary & Service Information

The family of Franklin Smith created this Life Tributes page to make it easy to share your memories.