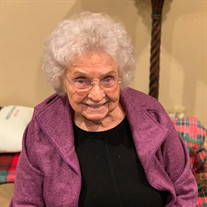 Emma Gray Goode went to be with the Lord peacefully at 4:19pm on April 19, 2022, at Twilight Home at the age of 96. She was surrounded by the family she adored as she took her final breath and entered the gates of Heaven. She was born October 28, 1925, in Dawson, Texas to Ed T. and Addie Peay Swink. She was one of eight children and spent most of her life in Navarro County. She was wed to the late Clarence Oliver Golden in 1944 in San Leandro, California. They were blessed with three children Debbie, Phil, and Tim. She was well known for owning Golden Onestop where she served food, sold bait, fuel, groceries, and had tube rentals near Navarro Mills Lake. She later married the late Charles Goode in 1971 and became bonus mom to Judith, Jan, and June. She was an avid sports enthusiast and she spent many of her days as a spectator at her grandchildren, and great grandchildren's sporting events. She loved the Dallas Cowboys, Dallas Mavericks, and especially the Texas Rangers. She was a great cook and known for her pies, homemade rolls, and jellies. It brought up great joy to share her cooking with family and friends, especially during her time living at Cambridge Crossing. She had many friends that she played games with often including her favorite game of dominoes and anyone who ever played with her knew she played to win! She was preceded in death by her parents and siblings but leaves behind a large family to continue her legacy. "Grandmother" leaves behind daughter Debbie and husband Barry Dillingham of Corsicana, Texas, son Phil and wife Terry Golden of Blooming Grove, Texas, and son Tim and wife Sherri Golden of Forreston, Texas. Grandchildren are Staci (Tommy) Mongomery, Shane (Kaycee) Hill, Jennifer (Tony) Aguado, Jeff (Ashley) Golden, Brooke (Travis) Chase, Bryan (Beth) Golden, Jordan (Shelley) Golden, and Barret Golden; great grandchildren, Hannah (Nathan) Murphey, Logan Golden, Seth Hill, Haddi Montgomery, Madison Dickerson, Landon Golden, Maddox Dickerson, Kooper Hill, Max Golden, Will Chase, Knox Golden, Kenzee Hayes, Zach Golden, Kate Golden, Sam Golden, Beau Chase, Gwenyth Chase and Zane Golden. She was also blessed to have a great great grandson, Noah Murphey. The family would like to give our sincere gratitude to the wonderful staff of Twilight Home for the exceptional care that was given. We would also like to commend Mercy Hospice as well as the Twilight staff that made her final transition as peaceful and dignified as possible. Visitation will be Saturday, April 23, 2022, from 1:00pm - 2:00pm; funeral service following at 2:00pm in the chapel at Griffin-Roughton Funeral Home with Bro. Grady Cashion officiating. Burial will be at Younger Cemetery. Pallbearers will be her great grandsons, Logan Golden, Landon Golden, Knox Golden, Maddox Dickerson, Seth Hill, Kooper Hill, and Nathan Murphey. In lieu of flowers, donations may be made to Younger Cemetery, P.O. Box 330, Purdon, TX 76679.

Emma Gray Goode went to be with the Lord peacefully at 4:19pm on April 19, 2022, at Twilight Home at the age of 96. She was surrounded by the family she adored as she took her final breath and entered the gates of Heaven. She was born October... View Obituary & Service Information

The family of Emma Goode created this Life Tributes page to make it easy to share your memories.

Emma Gray Goode went to be with the Lord peacefully at 4:19pm...

Send flowers to the Goode family.