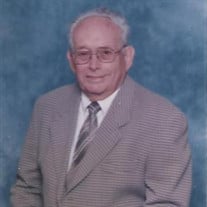 Earl Bush, Jr., 97 went to be with the Lord on Easter Sunday, April 12, 2020. Earl was born to Earl Bush, Sr. and Mae Bryant Bush on September 2, 1922 in Corsicana. He graduated from Corsicana High School where he played and performed in the Corsicana High School Band. After his high school graduation he went on to North Texas State University in Denton and successfully completed a Bachelors of Art Degree in Accounting in 1948. Earl returned to Corsicana and worked as an accountant at the First National Bank. He married Margaret Wells of Corsicana and celebrated 43 years of marriage. Both adventuresome, they chose to journey to Venezuela, South America so Earl could work as an accountant for Transcaribbean Construction of Tellepsen Corporation. Later, he had a company owned boats to transport individuals employed on the oil rigs. He shared many stories with his family about the Panama Canal and the South American Government about famous individuals he had met there and the friendships they had made with Venezuela families. During WWII Earl was an Army Sargent and served as a NCO Communications Specialist. He served in Normandy and while there he met General George S. Patton. He was a recipient of the Bronze Medal for heroic achievement meritorious service in a combat zone. Earl became a 32nd Degree Master of Lodge #174 in Corsicana where he kindled many friendships. He was a life long member of the NRA. He was a member of St. John's Episcopal Church in Corsicana. He was a gifted pianist. Earl was a passionate rancher and cattleman. He later became the chief executive officer of Bush LTD. Earl was preceded in death by Margaret Bush, Earl Bush Sr., Mae Bryant Bush, Jimmie Nell Bush Sutton, Dorothy Bush Burleson and Bryant Edward Burleson. Earl is survived by Virginia Ulloa Bush his wife & companion of almost thirty years, Gwynn Sutton, Kim Sutton (Carol), nieces, Cassy Burleson, Karon Sutton and Dana Renschler. He is also survived by many great and great nieces and nephews. We would like to thank his dedicated caregivers Carol Lunsford Baker, Tanya Lunsford and Frank Brown. Also thanks to Dr. Kent Rogers and Griffin-Roughton Funeral Home. A memorial is planned for a later date. God saw you were getting tired and a cure was not to be. So he put His arms around you and whispered "come to me." With tearful eyes we watched you as you slowly slipped away. And though we loved you dearly we couldn't make you stay. Your golden heart stopped beating your tired hands put to rest. God broke our hearts to prove to us He only takes the best

Earl Bush, Jr., 97 went to be with the Lord on Easter Sunday, April 12, 2020. Earl was born to Earl Bush, Sr. and Mae Bryant Bush on September 2, 1922 in Corsicana. He graduated from Corsicana High School where he played and performed in the... View Obituary & Service Information

The family of Earl Bush created this Life Tributes page to make it easy to share your memories.

Send flowers to the Bush family.