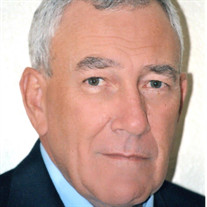 Donald Ray Jock was born July 30, 1946, and left his Earthly home to dwell in Heaven on November 16, 2020, surrounded by love and prayers. Don was raised in Kerens by his parents Charlie Edward Jock and Nannie B. Hemby Jock and graduated Kerens High School in 1964. He was raised to work hard. He joined the United States Air Force shortly after graduation where he served as an aircraft mechanic until his honorable discharge. While in the Air Force, Don married the love of his life, Edna Nutt Jock, and they were married 54 years. The couple had two children together, Sherrie and Tracy. His top priority in life was taking care of his family. Don retired from Texas Power and Light Company before finishing his bachelor’s degree at The University of Texas at Tyler. He worked for Corsicana Independent School District and completed his master’s degree at Texas A&M Commerce, instructed at Texas State Technical College and also Navarro College and retired a second time. His most rewarding career was retirement with his wife on the farm. He loved traveling with his wife, sitting with her and drinking coffee on the patio, and working on his farm. The ultimate pastime for Don was watching his children and then his grandchildren in all of their events, whether piano recitals or sporting competitions – he was in attendance. He was blessed with three grandchildren, Raeleigh, Leighton, and Chloe, and they were the light of his life, and he was always following them around to everything and teaching them everything he could. Throughout his life, he coached his son’s little league teams, worked the booster clubs and fields for the kids, and dedicated many hours to Mildred Little League. Don was a member of Providence Missionary Baptist Church for over 40 years, where he was a deacon of the congregation. Don was the chaplain of the Eureka Masonic Lodge #1060 and a past Worshipful Master. Don leaves behind many friends and family members, each of whom he cherished dearly and always respected, and they loved and respected him, as well. He will be deeply missed by all. Don is survived by his beloved wife, Edna, his daughter and son-in-law, Sherrie and Sean Kays; his son and daughter-in-law, Tracy and Dawn Jock; grandchildren, Raeleigh Lang and husband, David Lang; Leighton Jock and Chloe Jock. He is also survived by his sister, Grace Shuck. He is preceded in death by his parents Charlie and Nannie B Jock, his sisters Evelyn Combs, Pauline Bass, Louise Tackett, and Darlene Stacey, and his brother, Charlie Ray Jock. Serving as pallbearers for Don will be his grandson, Leighton Jock; his nephews, Randy Tackett, Mike Thompson, Charles ‘Bubba’ Bass, Greg Stacey, and Chris Jock. His honorary pallbearers will also be his nephews Matt Jenkins, Mark Lee, and Bryan Nutt. A visitation will be held from 10:30 - 12:00 at Griffin-Roughton Funeral Home in Corsicana, Texas, followed by a graveside service at Eureka Cemetery at 1:00.

Donald Ray Jock was born July 30, 1946, and left his Earthly home to dwell in Heaven on November 16, 2020, surrounded by love and prayers. Don was raised in Kerens by his parents Charlie Edward Jock and Nannie B. Hemby Jock and graduated Kerens... View Obituary & Service Information

The family of Donald Ray Jock created this Life Tributes page to make it easy to share your memories.

Send flowers to the Jock family.