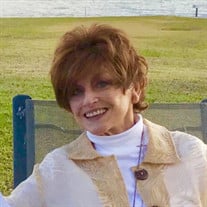 Deana Jo Thomas won her fight, shed her earthly body and entered the gates of Heaven on Wednesday, May 26th 2021. Dee was born on December 27th 1939 in Rainelle, West Virginia. She was the daughter of Mildred and William Vance. Deana met Charlie Thomas on a blind date to a dance, fell in love and wed on June 14th 1960. In 1973, the couple moved from Louisiana to Chatfield, Texas and established a home on many acres that was named “The Homestead.” Dee built her life around her three kids Timothy, Daniel and Holly. The title “Room Mom” was something that Dee was very proud to take on and she did an exceptional job at being Mom in all aspects of her children’s lives. “Miss Dee,” as she was often called, was someone with a very creative mind. She attended the Art Institute of Dallas where she refined a passion for art and painting. Dee worked for different design studios, one of which was Disney World, creating backdrops for various exhibits. She attended Arthur Murray Ballroom of Dance where she excelled in dance. She treasured her baby grand piano where she often played the most angelic music. She had an eye for creativity and made sure to never leave the small details out. At Christmas, it was never hard determining which gifts were from her because all of her gifts were so perfectly wrapped with a trinket and elaborate bow. Dee found her greatest joys in the eyes of her grandkids and great grandkids. “Mim” as she was so lovingly called would devote weekends to sleepovers, tea at The Crescent Hotel and playing dress up with her shoes and wardrobe. Dee was one of a deep faith, which gave her a solid foundation to living her life to the fullest. She took it upon herself to learn Hebrew, even having a weekly bible study with the local Messianic Jewish Group. In her home, you would find countless journals filled to the brim of scripture and notes. It is safe to say that Dee truly fought the good fight and she has won the ultimate race. Her smile could light up a room and her laugh was so contagious that it would turn any moment around. Her strength and faith in God was made evident in every aspect of her life. Her way of saying “Oh honey” would give one hope and just enough encouragement to keep going. She is preceded in death by her parents, Mildred (Midge) and William(Bill) Vance, her daughter-in-law, Sharon Thomas, and son-in-law, Carroll Moran. She is survived by family members; Charlie Thomas, Timothy Thomas, Daniel Thomas, and Holly Moran. Her grandchildren include: Meagan Shafer and husband Andy, Sarah Ballew and husband Caleb, and Rebecca Rossi. Great grandchildren include: Laker age 7, Grace age 6, Ava age 4, Levi age 3, and Valentino age 4. Visitation will be held Friday, May 28th 2021 from 6 to 7pm at Griffin Roughton Funeral Home of Corsicana. A celebration of her life will be held on Saturday May 29th 2021 at 10am at Northside Baptist Church of Corsicana with Pastor Daniel Harper officiating. Interment will be held at the Oakwood Cemetery of Corsicana under the direction of Griffin Roughton Funeral Home.

Deana Jo Thomas won her fight, shed her earthly body and entered the gates of Heaven on Wednesday, May 26th 2021. Dee was born on December 27th 1939 in Rainelle, West Virginia. She was the daughter of Mildred and William Vance. Deana met Charlie... View Obituary & Service Information

The family of Deana Jo Thomas created this Life Tributes page to make it easy to share your memories.

Send flowers to the Thomas family.