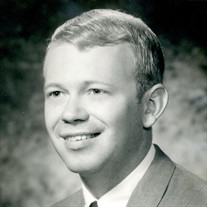 Reverend David Wayne Ricker was born April 12, 1946, and went to his Savior on February 23, 2020, at Navarro Regional Hospital in Corsicana, Texas. He is preceded in death by his mother, Lyda Cortez Ricker. He is survived by his father, William Lawrence Ricker, his wife, Ann Ricker, his two beloved daughters, Carolyn DeLong Ricker and Elizabeth Ann Ricker, who is the mother of his adored grandson, David William Ricker, all of Blooming Grove, Texas. He loved his Lord, his family, and his friends. In his youth, he was a Boy Scout, Eagle Scout, and Order of the Arrow. He graduated with honors from Northwest Classen High School of Oklahoma City. He went on to Oklahoma State University, where he received his Bachelor’s degree with honors in mechanical engineering. David was happily married for 50 years to Ann Hendrix Taylor, his high school sweetheart. He loved to travel with his family, and many summers were spent RVing. He was an avid fisherman and outdoorsman, and enjoyed crossword puzzles, Tom Clancy novels, and good coffee. David was an engineer at heart who in his spare time built computers, radios, model trains, and furniture. Procter & Gamble Co. recruited him directly out of college, where he worked as a manufacturing engineer and eventually, plant engineer of the Dallas P&G factory before moving to Corsicana, Texas. He retired from plant management in 1998 to then become a manufacturing consultant through the University of Texas at Arlington, at their Automation and Robotics Research Institute. He was active all his life in the church, becoming an elder at Northpark Presbyterian in Dallas, then an active member at First United Methodist Church of Garland, and then FUMC Corsicana. After his Walk to Emmaus in 2000, he answered God’s call to leadership within the church and received his Master’s in Divinity in 2006 from Brite at Texas Christian University. One of the greatest joys of his life was serving as pastor to three wonderful congregations: Eureka United Methodist, Barry United Methodist, and Kopperal United Methodist. In his final years he struggled against Alzheimer’s disease, but his spirit and heart remained true to his faith and love of family and church. A celebration of his life will be held Saturday, February 29, 2020, at First United Methodist Church of Corsicana, located at 320 N 15th St in Corsicana, Texas. A visitation beginning at 10am will be followed by a service at 11am, Dr. Steven Bell officiating. The family wishes to thank Bristol Hospice, Twilight Home, Navarro Regional Hospital, and TriSun Care Center for their attention to David during his illness. Memorials may be made to First United Methodist Church of Corsicana. Interment will be at a later date.

Reverend David Wayne Ricker was born April 12, 1946, and went to his Savior on February 23, 2020, at Navarro Regional Hospital in Corsicana, Texas. He is preceded in death by his mother, Lyda Cortez Ricker. He is survived by his father, William... View Obituary & Service Information

The family of David Ricker created this Life Tributes page to make it easy to share your memories.

Send flowers to the Ricker family.