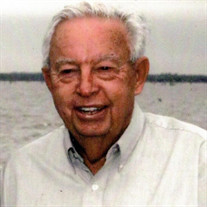 Darwin was born on 7/30/1930 To WP and Fleeta Miller. He passed away peacefully on December 27, 2020. He was born and raised around the Navarro and Mildred area. Darwin attended school and graduated from Mildred High School, afterward attending and graduating from North Texas State University. He married his high school sweetheart Wanda Brashear in 1950 and lived a full life of 67 years together before she passed away in 2017. During their life together, they had three children, Suzanne, Stacy, and Scott and from there his family grew with grandchildren and great grandchildren. He worked hard his entire life and was able to do what he enjoyed, running cattle and operating his oil business for almost 60 years. But more important than that to him was his family. He truly was a family man and was the happiest when family was around drinking coffee with him. This was a pattern of life that he had with his dad and he passed it on to his children. There was not much that was more pleasant than visiting with him and mom. He always wanted his family around and didn’t want them to leave. We will miss those visits. One of the most important part of life to Darwin was his faith in his creator, Jehovah. He became one of Jehovah’s Witnesses in 1972 and served many years as an elder with the Corsicana Congregation. He firmly believed in the hope of the resurrection and often expressed that hope as family members fell asleep in death. He spent time each month of his life visiting with others regarding his faith and the hope the Bible offers. This is what made him who he was. It was often heard by his family how much he was respected for his kindness and his friendly way. Darwin was preceded in death by his parents, WP and Fleeta Miller, his wife Wanda, his daughter Suzanne Miller, his grandson Shae Rogers, his son-in-law Mike Rogers, and his two brothers Bruce and Ronnie Miller. He is survived by his children Stacy Rogers and Scott Miller and his wife Lisa; his grandchildren Chad Kindle and his girlfriend Adriane Ivison , Justin Rogers and his wife Zonia, and Kristin Valdez; his great grandchildren Victoria Pryor, Rebecca and Preston Kindle, Harley Plant, and Lily and Ada Valdez; his brother-in-law Mike Brashear and his wife Beverly. His extended family include many cousins and their families. The family wanted to express deep appreciation to Dad’s caretakers at Brookdale. With visitation being limited, we knew that he was being well cared for. Thank all of you so much. We also want to thank Dr. Kent Rogers for such good care of Dad over the decades. Due to the COVID-19 pandemic the family has made the decision to forgo a visitation and funeral. Only a private grave side will be held by his children and grandchildren. Darwin would not have wanted to risk the health of others. Arrangements have been made with Griffin-Roughton Funeral Home. If any one wishes, they can visit the funeral home and sign the guest register. Please be assured of the family’s deep appreciation for your thoughts and prayers.

Darwin was born on 7/30/1930 To WP and Fleeta Miller. He passed away peacefully on December 27, 2020. He was born and raised around the Navarro and Mildred area. Darwin attended school and graduated from Mildred High School, afterward attending... View Obituary & Service Information

The family of Darwin Miller created this Life Tributes page to make it easy to share your memories.

Send flowers to the Miller family.