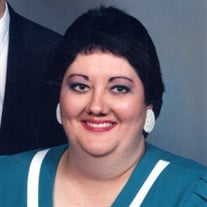 Darla Gayle Moore was born May 23, 1961 to Frances and R.D. Heflin in Port Aurthor, Texas. She made her profession of faith when she was seven years old and Baptized in Limon Costa Rica in the Caribbean. She participated in several church activities including teaching Children's Sunday school since the age of thirteen. Darla graduated high school from Costa Rica Academy in 1979. She attended Jacksonville Baptist College, East Texas Baptist University and Texas Tech University. Over the years she touched the lives of many people, leading them to Christ and loving all who entered her Sunday school classroom. She was a loving wife, a mom to many, and a friend to all. Darla was the epitome of what we all should strive to be as Christians. She read her Bible daily and prayed for all others above herself. She was a true servant of God and was always putting others needs above her own. Her favorite verse was Jeremiah 33:3 "Call unto me and I will answer you, and will tell you great and hidden things that you have not known." Darla married the love of her life, Elton Lee Moore, on March 26, 1988. She is preceded in death by her son , Philip Moore and father, R.D. Heflin. She is survived by her husband Elton of Fairfield, her daughter in law Ainsley Moore of Waco, her mother Frances Heflin of Fairfield, mother in law Barbara Storey of Fairfield, her brother Marshall Heflin and wife Debbie of Marshall, her brother David Heflin and wife Jenifer of Jacksonville, her sister Charlotte Hudler of Longville, Louisiana, and sister Gena Easterling and husband Robert of Nacogdoches, sister in law LInda Lott and husband Jimmy of Gainesville. She is also survived by nieces and nephews, Brian Heflin and wife Tangi, Joel Heflin, Jonathan Heflin, Elizabeth Heflin, Dwight Hudler and wife Bridgette, Chris Hudler and wife Sara, Kathleen Gardin and husband Nick, and Joshua Easterling and wife Liz, Matt Shaver and wife Linnie, Suzannne Canon and husband Michael, and many great nieces and nephews. Visitation will be 6pm - 8pm Tuesday, December 21, 2021 at Calvary Baptist Church. Funeral service will be 10am Wednesday, December 22, 2021 at Calvary Baptist Church with Bro. Terry Skinner and Bro. Robert Easterling officiating. Burial will follow at Lake Chapel Cemetery. Pallbearers will be nephews, Brian Heflin, Joel Heflin, Jonathan Heflin, Dwight Hudler, Chris Hudler, Joshua Easterling. Honorary pallbearers will be Calvary Baptist Deacons: Gary Stephenson, Clois Mullen, Curtis Red, Larry Davis, Tommy Miller, Don McLeod, Jerry Sheppard, March Chavers, Wesley Keeney, Dennis Lane, Daniel Phillips, Michael Wren, Joe Wren, Marvin Mullen, George Patterson. The Soldiers of Christ Sunday School Class, Clint Seale, Lindale Phillips, Clayton Winkler, Boyd Jackson, Billy Patterson, Johnnie Green, Jack Withers, Charles Easterwood, Keith Whitaker, Philip Ivy, Sue Little, Mary Stephenson.

Darla Gayle Moore was born May 23, 1961 to Frances and R.D. Heflin in Port Aurthor, Texas. She made her profession of faith when she was seven years old and Baptized in Limon Costa Rica in the Caribbean. She participated in several church activities... View Obituary & Service Information

The family of Darla Gayle Moore created this Life Tributes page to make it easy to share your memories.