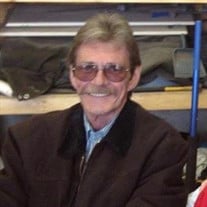 Dalton Elliott Thompson, age 62 passed away on Tuesday, August 25, 2020 at Navarro Regional Hospital. He was born October 11, 1957 in San Antonio to Glenn and Rowena Thompson. On September 20, 1976 he enlisted in the United States Army where he served 4 years and achieved the rank of Specialist (PS4). He married Bonnie Rae West in December 1976 and during their 8 year marriage the pair welcomed their daughters, Miranda and Casey. In 1988 he married Mary Ann Varela, and throughout their 15 years together, they raised their son, Bradley. Dalton is remembered by his siblings as a loving, kind, and generous brother; a man who loved to joke, laugh, and make others happy. He was a gifted singer and guitarist and enjoyed gospel music as well as classic country, especially Marty Robbins. A favorite pastime was singing with his mother the gospel songs she wrote. Dalton is survived by his children; Miranda Dye of Fort Worth, Casey Thompson of Sherman, and Bradley Thompson of Dallas; grandchildren, Rowan, Korbin, Malcolm, and Graycie; his sisters, Rowena Manning, Melody Weaver, and Kris (Ricky) Wilson along with numerous other nieces and nephews. He was preceded in death by his parents, Glenn and Rowena Thompson and brothers, Lloyd Manning and Wallace Manning. Visitation will be Thursday, September 10, 2020 from 10:00am-11:00am with Funeral Service following at 11:00am in the Chapel at Griffin-Roughton Funeral Home. Burial will be at DFW National Cemetery at 2:30pm. Flowers, donations, and condolences may be offered at Griffin-Roughton Funeral Home 1530 N 45th Street Corsicana, Texas 75110.

Dalton Elliott Thompson, age 62 passed away on Tuesday, August 25, 2020 at Navarro Regional Hospital. He was born October 11, 1957 in San Antonio to Glenn and Rowena Thompson. On September 20, 1976 he enlisted in the United States Army where... View Obituary & Service Information

The family of Dalton E. Thompson created this Life Tributes page to make it easy to share your memories.

Send flowers to the Thompson family.