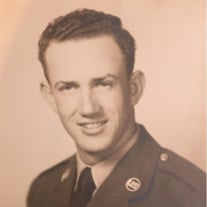 Dale Bryan McCeig “Granddad” went to be with his Lord and Savior, Jesus Christ on April 3, 2022, at the age of 90 after a lengthy battle with dementia, surrounded by his family in his hometown of Fairfield, Texas. Dale was born on May 24, 1931, in Dew, Texas. He was a friend to all and a faithful servant of the Lord all of his life. At the age of 8, Dale’s father passed away from tuberculosis leaving behind a wife and 5 children. As the eldest, Dale worked to help his widowed mother and cared for his siblings. He often spoke about his days harvesting watermelons for money and the time that he attempted to cook his mother a birthday cake only to forget the eggs. His mother, Olive, was known for being a wonderful woman who raised her children to love God and value the church. Dale often mentioned how God commands the church to look after the widows stating that the local churches did just that for his mother. Even well into his last days, Dale expressed gratitude to the local churches and neighbors who helped his mother and family. At the age of 24, Dale met the love of his life, Bonnie White, at a local skating rink. Dale was called to serve in the Air Force in Korea and after 4 years of service, married Bonnie without pause on November 16, 1957. They were married for 64 years with Dale telling everyone he met how much he loved Bonnie and how well she always took care of him. Together, they had 3 children who they raised to also respect the church and cling to family. When Dale and Bonnie were first married, they lived in Houston, Texas, where Dale worked for the Eastern States Oil co. and was a part time owner of Houston Marble co., but they soon moved back to Freestone County where Dale worked for the local telephone company, Contel. Those close to Dale say he was well-known for his love of cattle and spent most of his days with his herds. His friends and family always knew if they needed to find Dale to go look in the pasture. A kind husband and loving father, grandfather, and great-grandfather, his family recalls numerous dinners and large family reunions. When it was time to eat, the family would look to Dale to say the blessing and share words of wisdom. His large family was very important to him, and he enjoyed watching his kin-folk play dominos and eat potluck lunches on hot summer days. Although a terrific 42 player, he typically spent his time with family swapping stories. He always loved a good conversation. Dale was also known to the Freestone County community for his love for God. He served as a deacon for Calvary Baptist and First Baptist Church for many years and was always celebrated the good fortune of others. If you ever visited with Dale McCeig, you would remember him telling you how great God has been to him and likely asking to read scripture or pray together. His favorite Bible verse was Philippians 4:6-8. Dale is preceded in death by his father, Willis Jennings Bryan McCeig, his mother, Olive Gardner McCeig, and his 4 siblings, Christine Day, Wanda Poole, James McCeig, and Harrell McCeig. He is survived by his wife, Bonnie McCeig of Fairfield, Texas, son and daughter-in-law, Larry and Christa McCeig of Fairfield, Texas, , daughter and son-in-law, Michele and Mike Estes of Chapel Hill, Tennessee, son and daughter-in-law, Michael and Meaghan McCeig of Lindale, Texas; 7 granddaughters and 2 grandsons; Valerie McCeig of Mansfield Ohio, Melissa and her husband Greg Crenshaw of Lindale, Texas, and Kristina and her husband Ryan Lewison of Austin, Texas, Sarah McCeig of Lindale, Texas, Amy Lansford of Teague, Texas, Grace and Maddie Estes of Franklin, Tennessee, and Zachary Rushing and his fiancé, Ruthie Mason of Franklin, Tennessee, Ethan Lansford and his wife, Cheyenne of Angleton, Texas; 3 great-granddaughters and 1 great-grandson; Alyssa Ezell and Devyn May of Mansfield, Ohio, and Caitlyn and Benjamin Crenshaw of Lindale, Texas, as well as numerous cousins, nieces, nephews, and many friends. Funeral services will be held at Griffin-Roughton Funeral home in Fairfield, Texas, on April 8, 2022, at 2pm with Brother Benny Mize officiating. Burial at Dew Cemetery to follow. A visitation will be on April 7, 2022, from 6pm-8pm. The family would like to express thanks for the wonderful help and care given by Solaris Hospice. “Do not be anxious about anything, but in everything by prayer and supplication with thanksgiving let your requests by be made known to God. And the peace of God, which transcends all understanding, will guard your hearts and minds in Christ Jesus. Finally brothers, whatever is true, whatever is honorable, whatever is just, whatever is pure, whatever is lovely, whatever is commendable, if there is any excellence, if there is anything worthy of praise, think about these things.” Philippians 4:6-8

Dale Bryan McCeig &#8220;Granddad&#8221; went to be with his Lord and Savior, Jesus Christ on April 3, 2022, at the age of 90 after a lengthy battle with dementia, surrounded by his family in his hometown of Fairfield, Texas. Dale was born... View Obituary & Service Information

The family of Dale McCeig created this Life Tributes page to make it easy to share your memories.

Dale Bryan McCeig “Granddad” went to be with his Lord and Savior,...

Send flowers to the McCeig family.