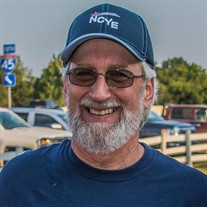 Ervin Dale Farmer, 65, of Angus passed away Monday, August 17th, 2020 in his home surrounded by family and friends. He fought a courageous fight, but lost his battle to cancer. Visitation will be Friday from 6 to 9 pm. Services will be Saturday, 10 am at Griffin-Roughton Chapel with services conducted by John Robinson. Following services, burial will be at Richland Cemetery. Pallbearers will be Chuck Rash, Jerry Newsome, Larry Adams, Bob Aldama, Jon Aldama, and John Remonte. Honorary pallbearers: Benny Lambert, James Almond, Gene Grimes, Angus Volunteer Fire Dept. Dale was born June 24th, 1955 in Corsicana, TX to Jerry E. and Delorise Farmer. He was a Corsicana High School graduate, Class of ’73. He started working in his granddaddy’s tire shop at a very young age, learning the business. He continued helping and eventually took over running the Goodman Tire Shop after Mr. Goodman passed away. He began working with the Angus Volunteer Fire Department in 1986. Dale served in many capacities with the fire department, including fire chief for 28 years. He loved serving his community through the fire department and Navarro County Firefighters Association. He received several certificates of attendance for his devotion. He had a love and interest for motorcycles and classic cars. He was the most devoted father to his daughter, Crystal. I was proud to call him my Daddy. He was preceded in death by his mother, Delorise Farmer; grandparents: H. L. & Stella Goodman, T.O. & Myrtle Farmer, and Elmer & Allie Belle Marr; great grandparents Mr. & Mrs. R. J. Carter; and numerous other beloved family members. Dale is survived by his father Jerry E. Farmer; his only child, Crystal Marie (Farmer) Hicks and husband Delwyn; Crystal's mother Liz Tallant & family; sister Karen Sue Farmer and James Almond; niece Shelley Karise Almond and great nephew Marcus Perkins; friend and brother Benny Lambert and wife Brenda; numerous nieces and nephews, extended family members and close friends. He is also survived by the love of his life, Debbie (Almond) Seabolt, who he reconnected with in September of 2019 after a lifetime apart. She was his first and final love. Thank you to New Century Hospice and other medical professionals that helped Dale through his battle with cancer. We were all blessed to have Dale in our lives for the 65 years he was on this earth. He had a good soul, loving heart, and a great smile. In lieu of flowers, we ask that you make a donation to Angus Volunteer Fire Department, or a volunteer fire department near you.

Ervin Dale Farmer, 65, of Angus passed away Monday, August 17th, 2020 in his home surrounded by family and friends. He fought a courageous fight, but lost his battle to cancer. Visitation will be Friday from 6 to 9 pm. Services will be Saturday,... View Obituary & Service Information

The family of Dale Farmer created this Life Tributes page to make it easy to share your memories.

Send flowers to the Farmer family.