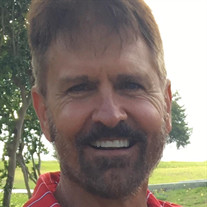 Craig Frederick Tekell, 64, passed away at The Village at Heritage Oaks in Corsicana, Texas on Friday, February 12, 2021. Craig battled dementia for several years and on January 29, 2021 was admitted to Mansfield Hospital for an infection. After several days of battling the infection along with other diagnoses, Craig was called home, his true home, to be with Jesus. Craig was born December 31, 1956 in Corsicana, Texas to Gerald Don Tekell and June Carol Tekell. Craig grew up in Corsicana, graduated from Corsicana High School, received a Bachelor of Arts from Baylor University and his master’s degree in Seminary. Craig married his high school sweetheart, Christi Tekell, at First Baptist Church in Corsicana on July 11, 1981. Craig and Christi would have been married 40 years this July. Craig and Christi had two children, Tyler Tekell and Ashley Parker. Craig always had a desire to witness to others and make a positive impact in others’ lives. This is one reason why he dedicated his career to mentoring youth. Craig began his career by working in a wilderness camping program for troubled youth where they would camp in the woods for weeks at a time, having to build their own shelters, hike for water, and other activities that would strengthen and create discipline. Craig then worked at TYC in Corsicana for over 10 years. After this time, Craig moved in a different direction and founded and operated New Encounters Residential Treatment Center, a group home for troubled male youth located in Mildred, Texas. Craig began this business in 1992 and has had success with the help of a trusted and long-time friend, Butch Bower. Through this company, Craig has been able to change the lives of many and has led many of the young men to accepting Jesus. New Encounters is still operating today and is directed by Craig’s son, Tyler Tekell. Craig was a one-of-a-kind and can often be described as goofy, carefree, kind, compassionate, and without a doubt, stubborn. He did everything he could to provide a bountiful and Christ-centered life for his family. Craig and Christi both dedicated their lives to witnessing to others about Jesus Christ and both served as Sunday School teachers at First Baptist Church in Corsicana, Texas. Craig loved sports and coached several athletic teams for both of his children. One year, he was the head coach for Tyler’s youth baseball team and led the team to win second in state. Craig did love most sports, but if you knew Craig, you knew his favorite sport of all was golf. He was an excellent golfer and spent many sunny days on different golf courses enjoying life. Craig also loved to hunt and him and his son share many memories of hunting dove and wild hogs together. Craig was a faithful husband and the best father anyone could ask for. Craig always liked to do silly things as he would say, “to make a memory,” such as jumping in the freezing pool on Christmas Day. We always laughed at this, but now we are thankful for these memories that we can cherish with us for the rest of our lives. Craig is survived by his wife, Christi Tekell, brother Keith Tekell and wife Donna Tekell, brother Victor Tekell and wife Gabrielle Tekell, son Tyler Tekell, daughter Ashley Parker and husband Mason Parker, one unborn granddaughter due March 17, 2021, nephew Christian Tekell and wife Kelsey Tekell, niece Hayley Nieto and husband Nick Nieto, niece Emily Tekell, niece Courtney Brogdon and husband Jourdan Brogdon, niece Kristen Boyd and husband Shawn Boyd, nephew Jonathan Tekell and wife Jillian Tekell, mother-in-law Doris Wahlenmeier, sister-in-law Brenda Sherrill and husband Robert Sherrill, nephew Jeff Yates and wife Jill Yates, great nieces, Sydney and Sadey Yates, great nephew Marty Yates. Visitation will be held at Griffin-Roughton Funeral Home in Corsicana, Texas on Friday, February 19th from 6-8 p.m. and funeral services will be held at First Baptist Church in Corsicana, Texas on Saturday, February 20th at 10:00 a.m. Burial will be at Oakwood Cemetery. Below are the links for the livestream funeral service. https://www.youtube.com/channel/UCU4guHLtDKAEaXRlYqAi7vA/live https://www.facebook.com/firstbaptistcorsicana/videos

Craig Frederick Tekell, 64, passed away at The Village at Heritage Oaks in Corsicana, Texas on Friday, February 12, 2021. Craig battled dementia for several years and on January 29, 2021 was admitted to Mansfield Hospital for an infection. After... View Obituary & Service Information

The family of Craig Tekell created this Life Tributes page to make it easy to share your memories.

Craig Frederick Tekell, 64, passed away at The Village at Heritage...

Send flowers to the Tekell family.