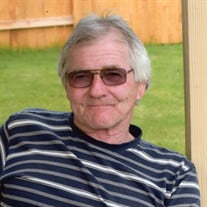 Clovis Herschell Baker, 67 of Lake Jackson, passed away April 4, 2020 in Lake Jackson. He was born November 9, 1952 in Corsicana to Hershell and Lucille Holloway Baker. He retired from the US Army after 20 years, served as contractor following... View Obituary & Service Information

The family of Clovis Baker created this Life Tributes page to make it easy to share your memories.

Send flowers to the Baker family.