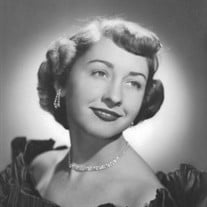 Friday, November 19, 2021, in Dallas, Texas, Cindy York Eubanks, gloriously met The Lord, eager to reunite with family, but sorrowful that she would be leaving her earthly family. Surviving Cindy, is her husband of 68 years, Dr. Herbert E. Eubanks, Jr., sons, Herbert E. Eubanks III (Debbie), Byron Jeffrey Eubanks (Dee), grandchildren, Cade Bass (Becca), Herbert E. Eubanks IV, Jordan Eubanks Sabatka (Quint), Katherine Alana Eubanks, great- grandchildren, Marek Sabatka, Parker Bass and Elliott Bass. She is also survived by her brother, Dr. Byron York, Jr. (Amber). She was predeceased by her parents, Dr. Byron York, Sr. and wife Lucille, daughter, Sara Eubanks Bass and grandson, Robert Dane Bass, Jr. A depression era baby, Cindy was born in Houston, Texas, April 30, 1931 to Dr. Byron York, Sr. and Lucille York. Growing up in Houston during tough times following the depression, she relished telling how she loved to accompany her pediatrician father on his calls, especially to the Shriner’s Hospital for Children. Cindy was a graduate of The Kinkaid School and attended Southern Methodist University, The University of Texas at Austin, and she finished her studies at University of Houston, where she met the love of her life, Herbert. At school, she was an outstanding student, routinely making the dean’s list and was an active member of her sorority, Zeta Tau Alpha. She enjoyed tutoring and excelled in everything, but was most proud of her A in Organic Chemistry, a knowledge she never forgot. During her last of many visits to the hospital, her son playfully said, “Mom, I think on the periodic table, sodium is K, and she immediately replied, “No! Sodium is Na, potassium is K!” While she was a voracious reader, sometimes completing a book a day, her love of reading and studies were only outweighed by her devotion to family. She spent many years working alongside her husband in his dental practice. In their pastime, they enjoyed their bay house, and a mutual love of boating and dancing, celebrating life to the fullest. Her loyalty and love for her husband was unsurpassed. She was also a much loved mother, with each one absolutely, arguably, positive that they were her favorite! As a grandmother, her grandchildren would say, “Nana” was the best! She devoted her time to each one, and was responsible for all their college educations. Her greatest desire was that each receive an education and attain success. Whatever project Cindy tackled, whether it was sewing, knitting, quilting or any kind of handwork, her designs and creations were above and beyond all expectation. She was never without a project. She put her whole heart into it, and selflessly gave most as gifts to family, which they treasured and looked forward to receiving. Cindy’s greatest desire was to please each and every family member. She will be remembered as a gracious, devoted, loving wife, mother and Nana. Page | 1 “Her children rise up and call her blessed; her husband also, and he praises her:” “Many women have done excellent but you surpass them all.” Proverbs 31:28-29 Arrangements are in care of Griffin-Roughton Funeral Home, Fairfield, Texas.

Friday, November 19, 2021, in Dallas, Texas, Cindy York Eubanks, gloriously met The Lord, eager to reunite with family, but sorrowful that she would be leaving her earthly family. Surviving Cindy, is her husband of 68 years, Dr. Herbert E. Eubanks,... View Obituary & Service Information

The family of Cindy Eubanks created this Life Tributes page to make it easy to share your memories.

Send flowers to the Eubanks family.