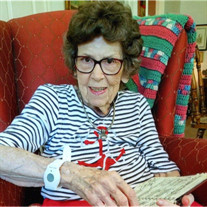 Euneva Christine (Ray) Luther Joy Comes in the Morning - Psalm 30:5 Early Saturday morning, September 12, 2020, Christine was released from her suffering. At the beginning of her struggles with illness at 91, she commented that she had lived a wonderful life, with few ailments and many blessings. She had only been in the hospital twice in her lifetime, in 1948 when her only child was born and in 2020, on August 17th when she experienced the effects of a brain tumor on Monday, followed by a broken hip on Wednesday. On Saturday morning, Christine's joy was found in the arms of Jesus Christ her savior. Euneva Christine Ray's life began on June 14, 1929 in Emhouse, Texas. She was the fourteenth child born to the blended families of Bezaleel Ray and Minnie Eula Meador, and she was the last living child of that union. The family affectionately called her Baby Angel, and they doted on her throughout her lifetime. After graduating from Emhouse High School, Christine worked in Corsicana at the telephone office. While in Corsicana, she met James "Jelly" Luther, and it was love at first sight. Shortly thereafter, they were married in Macomb, Mississippi, on May 22, 1947. Theirs was a love that lasted sixty years, before Jelly died on October 4, 2007. During those years, they traveled the continental United States and internationally to Turkey, Germany, France, Holland and Belgium with the Associated Pipeline Company. After Jelly's retirement from pipelining, they settled in Navarro County where they became active members of Barry Baptist Church. The country girl from Emhouse attained a life of experiences and adventures that she had never believed were possible. Christine was preceded in death by her husband; her parents; her siblings, Eula Ray Tallant, Thomas Ray, Frank Ray, James "Preacher" Ray, Garvis Ray, Sam Allen, Willie Mae Allen Owen, Verlie Allen Turner, Elmer "Judge" Allen, Jodie Allen Miley, Alvie Ray, Clarence Ray and Marie Ray Adams. Christine is survived by her daughter, Debbie Piel and husband Armin; her granddaughter, Kristi Williams and husband Josh, and her great granddaughters Gracie and Kaylee; brother-in-law Robert Luther, Jr. and wife Jane; numerous nieces, nephews, cousins and friends. Special acknowledgement to the Singing Missionary at Barry Baptist Church. Stan Mizell provided his recorded gospel songs and encouragement for Christine each week. These brought her great enjoyment. Special recognition and appreciation goes to the Assisted Living Director Janet and the 600 hall staff at the Village at Heritage Oaks, especially Sherry, Ruth, Beverly, Shemeka, Julia, Maria, Carla and Marcellus, who gave exceptional daily care and TLC to Christine. Funeral Service will be 10:00am Saturday, September 19, 2020 at Griffin-Roughton Funeral Home, with burial at Pattison Cemetery near Emhouse. Memorials may be made to a charity of your choice or to Barry Baptist Church or Westside Baptist Church, if desired.

Euneva Christine (Ray) Luther Joy Comes in the Morning - Psalm 30:5 Early Saturday morning, September 12, 2020, Christine was released from her suffering. At the beginning of her struggles with illness at 91, she commented that she had lived... View Obituary & Service Information

The family of Christine Luther created this Life Tributes page to make it easy to share your memories.

Joy Comes in the Morning - Psalm...

Send flowers to the Luther family.