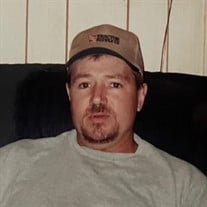 Chad Perry, 54, of Corsicana passed away Sunday, July 25, 2021, in New Boston, Tx. He was born on November 1, 1966, in Ennis, Texas to Clemons E. Perry and Senie B. (Vick) Perry. He had one sister and two brothers; Chad was the baby. He married Patricia Zappettini January 7, 1985. Chad attended Corsicana ISD and was very passionate about art. He also had a piece of his artwork hung at the State Capitol while in Middle School. After high school, Chad began working at Texas Engine Service and Machine, later Texas Crankshaft and then on to Explorer Boats. Chad spent most of his free time working on car and boat motors, fishing, camping, and doing sports with the kids. In recent years, Chad completed all his Basic Ministry Courses and was looking forward to being home with his family again. Chad is survived by his father, Clemons E. Perry; one sister, Pam Price Chapman and husband Thomas, and one brother, James A. Knight and wife Stacey; five children, Joseph Perry and wife Tricia, James Perry and wife Journey, Joshawa Perry and wife Nina, Samantha Buchanan and husband James, and his baby boy Robert Perry; twelve grandchildren, Ryan, BreAnna, Gracelynn, Alik, Mackenzie, Donny, Ayden, Keeghan, JB, Isabell, Madylyn and Rayleigh. Numerous nieces, nephews, cousins, in-laws, and friends. Chad is proceeded in death by his mother, Senie B. (Vick) Perry and brother, Jack A. Knight. Visitation will be Sunday, August 1, 2021 from 6-8pm at Griffin - Roughton Funeral Home. Graveside services will be 10:00am Monday, August 2, 2021 at Rice Cemetery. Burial will be at Rice Cemetery next to his beautiful mother. A GoFundMe account has been set up to help the family with expenses. Cash App and Venmo are also available. “I hope you're dancing in the sky And I hope you're singing in the angel's choir And I hope the angels know what they have I'll bet it's so nice up in Heaven since you arrived”

The family of Chad Perry created this Life Tributes page to make it easy to share your memories.

Send flowers to the Perry family.