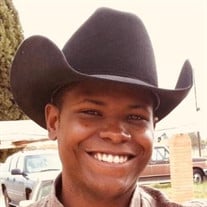 Cassius O’Shay “O” Phillips, 35, of Corsicana, Texas, died on December 25, 2021. He was born on September 21, 1986, to two loving parents, Cassias and De’Renda Phillips, in Dallas, Texas. O’Shay attended Mildred Independent School District where he enjoyed playing several sports, including baseball and football, and formed life-long friendships. Upon graduation, he attended Navarro College and the University of Texas at Tyler, where he played collegiate baseball. On March 20, 2012, O’Shay and Torie Wallace, celebrated the birth of his pride and joy, Colt McClain Phillips. He worked as an Oil & Gas Pumper and later was employed with the Valley View Cattle Company. His hobbies included fishing, playing sports, and spending quality time with friends and family. O’Shay accepted Christ into his life at the age of 7 at Mildred Baptist Church and later became a part of the Cowboy Church of Corsicana family. O’Shay led a remarkable life, where his influence knew no bounds. He was witty, intelligent, and known to pull a prank (or several) on friends and family. He would often leave funny messages for his friends at school. O’Shay held a deep love and empathy for anyone that he met. His strength was demonstrated in his many athletic pursuits on the high school and collegiate level. His perseverance, despite a heart condition, did not prevent him from a good laugh or making others feel special. O’Shay is survived by his son, Colt McClain Phillips; his grandmother, Mrs. Sue Ray; his parents, Cassias and De’Renda Phillips; and his sister, LaVonna Phillips. He was preceded in death by his beloved grandparents, Freddie B. and Sarah Phillips and Wilmer Ray. Visitation will be 6:00pm - 8:00pm Monday, January 3, 2021, at Griffin-Roughton Funeral Home in Corsicana, TX. Funeral services will be 11:00am Tuesday, January 4, 2022, at the Cowboy Church of Corsicana with Derek Rogers officiating. Pallbearers will be Ricky Atkeisson, Chris Dozier, Marcus Kincade, Richard Lacy, Joel Wright, and James Jiles. Honorary pallbearers are Shaquille Johnson, Kevin Lewis, Otis Murrelll, Sherard Ray, David Walker, Deveion Wilson, and Dejuan Wilson. Memorials and donations may be made to the official GoFundMe page for O’Shay Phillips by Jessica Atkeisson.

The family of Cassius O'Shay Phillips created this Life Tributes page to make it easy to share your memories.

Send flowers to the Phillips family.