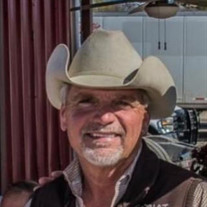 Carroll Edwin Moran, age 56 passed away on Friday, December 11, 2020. He was born on September 22, 1964 in Jacksonville, Arkansas to Harold and Gail Moran. Carroll moved to Corsicana with his parents at the age of 7 in 1971. His parents founded Corsicana Bedding. Carroll had a successful career in the home furnishing industry and under his leadership Corsicana Bedding became one of the largest most successful manufacturers in the country. Carroll could be summed up in two small words “Dream Big”. Carroll loved life and never met a stranger. He cared deeply for people and truly loved everyone in his life. He was passionate about giving people opportunities and helping them achieve all they could in life in any way he could. He never stopped setting goals and his ultimate goal was always to “win the race”. Carroll was an avid outdoorsman and accomplished hunter. He had traveled all over the world for many different species of animals. He was a cattle rancher and passionate about conservation. He loved his family most of all and his most proud titles were, husband, father, son, and Babu. He was preceded in death by his father, Harold and Sister-in-law, Sharon Thomas. He leaves behind his wife, Holly; mother, Gail; daughters, Marcey and son-in-law Paco Posada, Jackquelin and son-in-law Matt Grider; four grandchildren, Caroline, Abigail, Matthew and Madeleine; Father-in-law, Charlie Thomas; Mother-in-law, Dee Thomas; Brother-in-laws; Tim Thomas and Dan Thomas. He also leaves behind a host of other relatives, friends and friends who are family, Visitation will be Thursday evening from 5 – 7 pm at Northside Baptist Church. A celebration of his life will be Friday, December 18, 2020 at 10:00am at Northside Baptist Church with Pastor Rick Lamb officiating. Burial will follow at New Chatfield Cemetery. Pallbearers will be, Chad Grant, Jason Grant, John Matous, Bobby Grant, Darrell Cobb, Jeff Nelson, Ruben Gonzalez Lopez, Alan Thedford. Honorary pallbearers will be Gary Moran, Charles Eddy, Greg Barlow, Alan Stewart, Kenny Brown, James Wright, Jerry Stephens, Alan Payne, Jason Beard, Jim Ferer and Mike Hodge. Memorials can be made in Carroll’s name to the National MS Society at nationalmssociety.org or the Navarro County Youth Exposition 321 North 12Th Street Corsicana, Texas 75110. An on-line guest book is available at www.griffin-roughton.com. Funeral arrangements are under the direction of Griffin – Roughton Funeral Home.

Carroll Edwin Moran, age 56 passed away on Friday, December 11, 2020. He was born on September 22, 1964 in Jacksonville, Arkansas to Harold and Gail Moran. Carroll moved to Corsicana with his parents at the age of 7 in 1971. His parents founded... View Obituary & Service Information

The family of Carroll Moran created this Life Tributes page to make it easy to share your memories.

Send flowers to the Moran family.