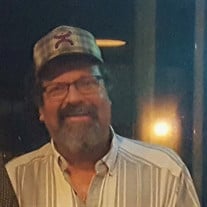 Bradley (Brad) Lynn Arnett went home to be with the Lord Friday, February 12, 2021, after a long, tough fight against kidney failure. Brad was born on December 17, 1964 to Robert and Barbara Arnett in Corsicana, Texas. He graduated from Mildred High School in 1983 and was a member of Mildred Baptist Church. He worked with his family at their construction business until 1993. When he went to work with his brother at Hunter Excavation in Ennis, Texas, where he worked until his death. Brad battled kidney issues from age 6. He had multiple surgeries and received the precious gift of kidney transplants in 1995 and 2019. Brad and his family will forever be grateful to the families who lost a loved one but were willing to share the gift of life with him. Brad loved the outdoors; he loved to fish, hunt and go frog gigging. He also loved watching his nieces and nephews participate in their sporting activities. Brad loved his family, and raised his niece and nephew, as if they were his own. Brad was preceded in death by his father, Robert Arnett, grandparents, Mable Eaton, Johnie Arnett, Jessie Arnett, and Beth Arnett. He is survived by his wife Leecia, mother Barbara Arnett, special niece and nephew, Jordan Fountain and Josh Fountain, brother Randall Arnett and wife Vicki, sister Rhonda Day and husband Bill, brother in laws Jim Bell and wife Tracie and Stephen Bell and sister in law Tina Rogers. He is also survived by nieces Amanda Scott and husband Clyde, Morgan Limmer and husband Judson, Jessica Carpenter and husband Kyle, NicoleBell, nephew Casey Carter and fiancé Lindsay Dornak, as well as numerous great nieces and nephews. He is also survived by is special fur baby Fran and special friends from Mildred High School, Class of 1983. Leecia and family thank everyone for the numerous calls, texts, and prayers over the past few months. Per Brad’s wishes a celebration of his life will be held at a later date. In lieu of flowers, donations may be made to an account established at Community National Bank and Trust, in memory of Brad Arnett or The National Kidney Foundation, online at kidney.org.

Bradley (Brad) Lynn Arnett went home to be with the Lord Friday, February 12, 2021, after a long, tough fight against kidney failure. Brad was born on December 17, 1964 to Robert and Barbara Arnett in Corsicana, Texas. He graduated from Mildred... View Obituary & Service Information

The family of Bradley Lynn Arnett created this Life Tributes page to make it easy to share your memories.

Bradley (Brad) Lynn Arnett went home to be with the Lord Friday,...

Send flowers to the Arnett family.