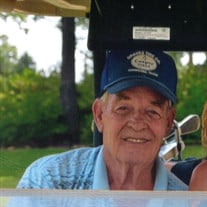 Bobby Glenn Ford, 77,of Corsicana passed away on January 14, 2022 in Corsicana, Texas. Visitation will be Wednesday, January 19, 2022 from 10am-11am with Funeral Services following at 11am at Northside Baptist Church with Pastor Daniel Harper, officiating. Mr. Ford will be laid to rest beside his wife of 50 years at Oakwood Cemetery. Arrangements are by Griffin-Roughton Funeral Home Bobby Glenn Ford was born in Bowie, Texas to Charles and Bonnie Ford on October 12, 1944. He went to school at Bowie High School where he graduated in 1963. He later attended Navarro College where he played football and earned associates degree. He married Beverly Wilson on July 31, 1964 in Bowie, Tx.. He worked as a Train Master for Union Pacific for 38 years. He coached Grey-Y football at the YMCA. He coached The American Blues little league baseball team for 19 years at BeeBee Field. He also, officiated both high school and college football games around Texas for many years. He spend a lot of time volunteering his time at BeeBee. After his retirement from the railroad, Mr. Ford went to work for Graves Tire for many years. He enjoyed playing golf and watch ESPN on the TV. He was also an Avid Dallas Cowboy Fan. Mr. Ford is proceeded in death by his wife of 50 years; Beverly Ford, his parents; Charles and Bonnie Ford; his brother; Charles Freddy Ford, and his step-mother; Wilma Ford. He leaves to cherish his memories… his children,; Michelle Coker (Jay), Glenn Ford (Grace), and James Ford. His grandchildren; Samantha Ford, and Skylar Capone-Ford. And his best friends of many years; Richard & Linda Cutrer. Pallbearers will be Kevin Armstrong, Jeremy Tipton, Richie Cutrer, Rusty Hitt, Whoa Dill, Stewart Smith, Michael Usery.

Bobby Glenn Ford, 77,of Corsicana passed away on January 14, 2022 in Corsicana, Texas. Visitation will be Wednesday, January 19, 2022 from 10am-11am with Funeral Services following at 11am at Northside Baptist Church with Pastor Daniel Harper,... View Obituary & Service Information

The family of Bobby Ford created this Life Tributes page to make it easy to share your memories.

Send flowers to the Ford family.