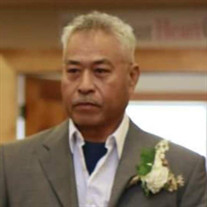 Bernell T. Alokoa, 64, of Mildred, TX unexpectedly passed away at his home on October 25, 2021. Bernell was born in the Federated States of Micronesia on the island of Kosrae, and traveled to the states to pursue his college education at Navarro College. While going to school, he met Teresa Barajas and had three of his children and later moved to Mildred, TX where he built the home he is so proud of. Bernell was a hard worker and spent many of his years at Guardian, Morgan, and Pactiv. He made many friends through his life and would always be willing to lend a helping hand. Friends would like to call him "chief" and "boss". Many would remember him as a strong, outspoken, but also very kind man. He loved the country and nature. Many times you could find him on his porch just sitting outside enjoying the peacefulness at his home. Fishing was one of his favorite things to do, and one might say his second favorite thing to do was eat the fish! Another one of his favorite pastimes was carpentry. He built his house with his bare hands, spread the concrete by hand, and diligently worked on it till it was finished. He built picnic tables, benches, stools, and anything you asked him he would put his mind and hands to work. He enjoyed doing it so much, that sometimes he would give away the things he built for free because it made him happy to make others happy. In the spring and summer he would have a little garden that he loved tending to. Bernell also enjoyed having animals around the house. He used to rescue birds that had fallen out of their nest and nurse them till they were healthy. Those birds would follow him to work and when he went home they would follow him right back to the nest he made them. His daughters dog mattie would do the same, she would follow him to the store and wait for him to come out and follow him right back home. He also loved all of his children and took so much pride in them. Anytime someone would go to his house he would always boast about how proud he was of them. And when he would see his grandchildren, his face would light up into a huge grin. He enjoyed talking with the grandkids because he could act silly and not have to be that strong man he always had to be in front of others. He could just be silly grandpa. Bernell was such a great man and he will leave a big hole in many peoples hearts, but we rest assured he was saved and knew Jesus as his Savior. And he is now looking down on us all and living the best life in heaven now. Bernell will always be remembered in our hearts. To keep his legacy going, he is survived by his children Berlyn Alokoa, Roseanna Alokoa Williams, Elizabeth Marie Meza, Bernell Joseph Alokoa, and many grandchildren. Fly High Daddy! We love you! Love, Your children

Bernell T. Alokoa, 64, of Mildred, TX unexpectedly passed away at his home on October 25, 2021. Bernell was born in the Federated States of Micronesia on the island of Kosrae, and traveled to the states to pursue his college education at Navarro... View Obituary & Service Information

The family of Bernell Alokoa created this Life Tributes page to make it easy to share your memories.

Send flowers to the Alokoa family.