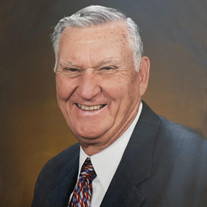 Barney Leo Newton, 86, of Ruidoso, New Mexico, died July 13, 2021. Mr. Newton was born September 30, 1934, in Decatur, Texas, to J. Frank and Lilla Newton. Barney attended Bridgeport High School in Bridgeport, Texas. He attended University of North Texas graduating in 1955 with a degree in Education. He later received his master’s degree in Administration and completed several hours towards his PhD. Barney married Sonya Youngblood Newton on June 1, 1954. They have three children together. He began teaching and coaching football in McKinney, Texas, and later in Plano, Texas. Barney was the principal of Plano High School, later becoming Plano Senior High, for 10 years before moving to San Antonio, Texas. He and Sonya lived in San Antonio for 23 years while Barney was the principal at Alamo Heights High School and Christian Heritage School. Barney served as an Elder at Northside Church of Christ for many years. In 2000, Barney and Sonya retired to Ruidoso, New Mexico. Barney remained actively involved with his church, his family, and the animals that visited his cabin. Barney is survived by his wife, Sonya Newton of Ruidoso, NM; three children Rickey Newton (Joanne) of Corsicana, Texas, Randy Newton of Wylie, Texas, and Kim Sharp (Richard) of San Antonio, Texas; nine grandchildren, four great grandchildren with another on the way. He was preceded in death by his father and mother and his two brothers, Billy Gene Newton and A.D. Newton; and his mother and father-in-law, Cyril and Glondon Youngblood. Funeral Service will be held 10:00am Saturday, July 17th at Griffin-Roughton Funeral Home. Burial will follow at Rose Hill Cemetery in Blooming Grove, Texas

The family of Barney Newton created this Life Tributes page to make it easy to share your memories.

Send flowers to the Newton family.