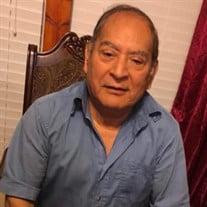 Arnulfo Aguilar, passed away Friday, January 8, 2021 in Corsicana. He was born August 15, 1946 in Jumiltepec, Morelos Mexico to Lauro Geronimo Aguilar and Maria Ines Ayala Rosas. Arnulfo was a very religious man. He was a member of Immaculate... View Obituary & Service Information

The family of Arnulfo Aguilar created this Life Tributes page to make it easy to share your memories.

Send flowers to the Aguilar family.