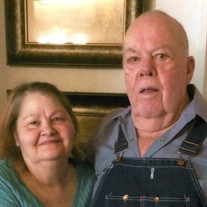 Ann Cobb Lewis of Lanley, Texas passed away on March 5, 2020 in Tyler with her family by her side. Mrs. Ann Cobb Lewis was born October 21, 1943 in Dallas, Texas at Parkland Hospital to Lewis L. Cobb and Velma Simons Cobb. Mrs. Lewis grew up in Dallas County. She attended Lancaster ISD. After school she went to work in a sewing factory in Dallas, to help provide for her other siblings. She met her husband Arthur J. Lewis. They got married in July of 1961. They spent 59 years of marriage together and had three children. Mrs. Lewis went to work for Dallas County ISD as a bus driver for the school of the deaf. They later started a fencing business in Dallas County. The Lewis's decided to relocate to Houston where they started AJ's Excavating. The business flourished and a few years later they relocated back to Dallas. They continued AJ's Excavating and also purchased a few country stores in Red Oak. She was a successful business owner. She retired and moved to the Lewis Ranch in 2008 for good. Mrs. Lewis loved to spend time with her family, work in her flower beds, going and getting her nails done every week, and she loved to go to Las Vegas to gamble. She also was the founder of Plum Creek Bluegrass Festival. She loved to shop, go on vacations, while spoiling her grandchildren. She was preceded in death by her husband, Arthur J. Lewis Sr of Lanley; parents, Lewis L. Cobb and Velma Simons Cobb of Dallas; daughter, Susie Lewis of Dallas; granddaughter, Brittany Wright of Lanley; brother, James D. Cobb of Dallas and one sister Ruth D. Cobb of Houston. She is survived by one son, Auther J. Lewis Jr.; daughter, Tammy Wright and husband George Wright Jr of Lanley; two sisters: Pat Stewart of Dallas and Shirley Dover of Dallas; two brothers: Teddie Cobb and Jr Cobb both of Lanley; one aunt Bessie Vest of Mexia; five grandchildren: Scooter Wright, Nikki Wright, William Wright all of Lanley; Jonathan Lewis of Waxahachie; and Jacob Lewis of Arlington; two great granddaughters Arayley Wright of Lanley and Brooklyn Lewis of Waxahachie. Visitation will be 6:00pm-8:00pm Friday, March 13, 2020 at Griffin-Roughton Funeral Home. Funeral Service will be 12:00 noon Saturday, March 14, 2020 at Griffin-Roughton Funeral Home Chapel. Burial will follow at Dew Cemetery. Donations can be made to St. Jude's Research Hospital.

Ann Cobb Lewis of Lanley, Texas passed away on March 5, 2020 in Tyler with her family by her side. Mrs. Ann Cobb Lewis was born October 21, 1943 in Dallas, Texas at Parkland Hospital to Lewis L. Cobb and Velma Simons Cobb. Mrs. Lewis grew up... View Obituary & Service Information

The family of Ann Cobb Lewis created this Life Tributes page to make it easy to share your memories.

Send flowers to the Lewis family.