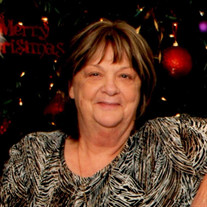 ANGELIN CHARISSE LOCKHART left this life on Friday, July 16, 2021 at age 66. Angie, as she was known by all, was born in Boone, North Carolina on November 24, 1954 to James & Jean Combs. She graduated from Haines High School in 1972, from Tyler Junior College in 1984, & from Wayland Baptist University in 2001. Angie’s great drive in life was caring for others, & it showed in everything she did. She was a nursing home administrator for 37 years, a volunteer emergency responder for 24 years, an advocate for education, & a frequent contributor to good causes. Angie was the centerpiece of her family. She raised her three children as a single mother. She called them her inspiration & her grandchildren her heart. She married Tommy Lockhart in January 2008. Some of her favorite times were vacations to Red River & the Carribean with her husband. Angie was an avid reader. She liked watching movies & TV shows, both classic & current. She instilled a love of comic book stories in her kids & grandkids, who all enjoyed sharing that interest with her. A football fan, she supported the Green Bay Packers & any family member who gave sports a try. She was fond of horse racing & had a real knack for picking winners. Angie will be remembered for her generosity, wisdom, determination, & enthusiasm for life. Angie was preceded in death by her father, James Carlton Combs. She is survived by her mother, Shelby Jean Combs of Corsicana; her husband, Tommy Lockhart of Corsicana; her three children, Robert Schnabel of Corsicana, Tara Dickson of Corsicana, & Courtney Dickson of Amarillo; her four grandchildren, Juliette Dickson, Elijah Dickson, & Ridgely Dickson of Amarillo, & Jordan Torres of Houston; her three stepsons, Rusty Freeze of Sterling City & his family, Cory Lockhart of Midland & his family, & Chris Lockhart of Memphis & his family; her four brothers, Jim Combs of Haines, Alaska, Sam Combs of Corsicana, Tim Combs of Fox, Alaska, & Phillip Combs of Saratoga Springs, Utah; her three nieces, three nephews, & their families. Visitation will be on Tuesday, July 20, from 6 to 8 pm at Griffin-Roughton Funeral Home in Corsicana. Funeral service will be held at 1 pm on Wednesday, July 21, at Griffin-Roughton Funeral Home. Another service will be held at 1 pm on Friday, July 23, at Robertson Funeral Directors in Memphis, Tx with burial following at Fairview Cemetery. In lieu of flowers, donations may be made to the St. Jude Children's Hospital.

ANGELIN CHARISSE LOCKHART left this life on Friday, July 16, 2021 at age 66. Angie, as she was known by all, was born in Boone, North Carolina on November 24, 1954 to James & Jean Combs. She graduated from Haines High School in 1972, from... View Obituary & Service Information

The family of Angie Lockhart created this Life Tributes page to make it easy to share your memories.

Send flowers to the Lockhart family.