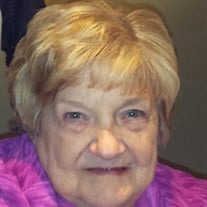 Alba Rae (Mickie) Ingram passed away August 25, 2021, at the age of 79. She died as a result of being stubborn. Mickie was born on May 4, 1942, in Pineville, LA. She was adopted as a baby by Herbert and Zelma Gibson. She grew up in the Alexandria, LA area, where her adoptive family owned and operated a little grocery store. When Mickie was a young girl, the family then moved to Oak Cliff, TX where Mickie attended school. Mickie worked at Curtis Industries in Dallas in the 1980s and later at the Allstate Catastrophe Center in Irving from 1995 to 2004. Mickie loved New Orleans Saints football, but hated the Dallas Cowboys and cilantro just as passionately. She adored all animals, especially her dog Sandy and her cat Bebe. She detested snakes, but when Mel brought home a pet python, she was eventually able to hold it without wanting to vomit. In her spare time, she enjoyed watching Lifetime Movie Network and Law and Order SVU. Her favorite movies were Steel Magnolias and Roadhouse. She was secretly in love with Sam Elliott, but who isn’t? Her teen crush was Ricky Nelson. Mickie met Eric Ingram in April of 1994, and they married December 14, 1996. Mickie was an active member of the Blooming Grove community, and she was an associate member of the Viet Nam Veterans of America, Corsicana chapter. Mickie loved her family, children, and grandchildren with her whole heart, as well as her Lord and Savior Jesus Christ. Mickie is preceded by her adoptive parents, Herbert and Zelma Gibson; son, Lester Morman; infant daughter, Lori Ann Morman; and granddaughter, Ashley Ann Klander. She is survived by her husband of 24 years, Eric; son, Randy Morman of Granbury; daughter, Melanie Klander and husband Kevin of Blooming Grove; stepsons, Eric (Ricky) of Roanoake; Dwayne Ingram and wife Lisa of North Richland Hills; grandchildren, Angel Tubbleville of Weatherford; Samuel Morman of Longview; Jessica Morman of Dallas; Nathan Klander and fiancé Aleena Rogers of Sherman; Ryder Morman of Granbury; Blair Ingram of Las Vegas, NV; Emalee Ingram of Reno, NV; Stuart Ingram and Wesley Ingram of North Richland Hills; Andria Dotson of North Richland Hills; great grandchildren, Travis Ingram, Marley Ingram, Sophia Dotson, Landry Rose Dotson, Benson Wayne Byron Klander; and honorary daughters, Nancy; Denise; and Yessica. The family would like to extend special thanks to Yessica for making her hair beautiful one last time. Pallbearers include Randy Morman, Kevin Klander, Ricky Ingram, Dwayne Ingram, Nathan Klander. Mickie would like all her friends and family to know her work here is done. She got a call – an invitation that she could not refuse—an invitation to a reunion with family and friends that she had not seen in a long time. Now in heaven, Mickie is restored -- once again able to walk, dance and eat anything she wants. Visitation will be 6-8 pm Friday, August 27, 2021 at Griffin-Roughton Funeral Home in Corsicana, TX. Funeral service will be 11 am Saturday, August 28, 2021 at Central Baptist Church in Blooming Grove with Bro. Darren Heil officiating. Burial will be at DFW National Cemetery on Tuesday, August 31.

Alba Rae (Mickie) Ingram passed away August 25, 2021, at the age of 79. She died as a result of being stubborn. Mickie was born on May 4, 1942, in Pineville, LA. She was adopted as a baby by Herbert and Zelma Gibson. She grew up in the Alexandria,... View Obituary & Service Information

The family of Alba Rae Ingram created this Life Tributes page to make it easy to share your memories.

Send flowers to the Ingram family.