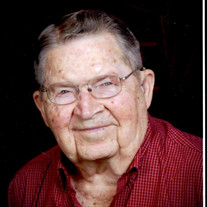 Mr. A.C. Murray, age 91 of Corsicana went to be with his Lord and Savior on Saturday, June 13, 2020 at his home. He was born in Pursley Community-Navarro County on November 18, 1928 to A.H. "Shorty" and Stella Murray. He was drafted and inducted into the U.S. Army on December 14, 1950 and sent to Germany in July 1951 as part of the peace keeping operation following World War II during the Korean War Era. He returned from Germany in November of 1952. After being released from active duty in December, he married Mary Lea Abbie on December 26, 1952 and they spent almost 66 years together. A.C. was employed by Texas Power and Light Company/T.U. Electric Company for 45 years mostly while living in Desoto. While there they were members of Hampton Road Baptist Church. After moving to Corsicana he and Lea joined Northside Baptist Church where they became an active part of the church ministry. He and Lea owned and operated a business known as "Trash to Treasure" and spent many weekends selling their creations in Canton on First Monday. A.C. was also an active long time member of the Lions Club in both Desoto and Corsicana. A.C. was preceded in death by his wife, Lea; his parents; brother, Eugene Murray; sister, Helen Cobb Morgan and son Steven Murray. He is survived by his son, Scott Murray and wife Pam of Allen, Texas and daughter Malea Murray Street of Ft. Worth, Texas; grandchildren, Ashley Murray of Allen, Texas, Jett Street of Austin, Texas, Skyler Street and wife Cassandra of Austin, Texas and two great grandchildren, Genevieve and Delilah of Austin, Texas. He is also survived by his brother, Kenneth Murray and wife Anita of Purdon, Texas. A.C. leaves numerous nieces, nephews, family and friends to cherish their memories of him. Visitation with the family will be held on Thursday, June 18th from 6:00 - 8:00 pm at Griffin-Roughton Funeral Home. Funeral Service will be 1:00pm Friday, June 19, 2020 at Griffin-Roughton Funeral Home Chapel with Dr. Rick Lamb officiating. A family graveside service will be at New Pursley Cemetery.

Mr. A.C. Murray, age 91 of Corsicana went to be with his Lord and Savior on Saturday, June 13, 2020 at his home. He was born in Pursley Community-Navarro County on November 18, 1928 to A.H. "Shorty" and Stella Murray. He was drafted and inducted... View Obituary & Service Information

The family of A.C. Murray created this Life Tributes page to make it easy to share your memories.

Send flowers to the Murray family.